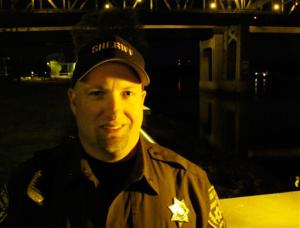 LA CROSSE, Wis. (AP) – It’s time to party on Third Street. Music pulses from bars late into the night. Young women in shorts and halter tops hustle down the sidewalks. Guys in hot rods gun their engines and tear up the street.

A block away in Riverside Park, all is quiet. But just beyond the park, the Mississippi River rolls silent and black. Standing guard along the bank are four young men who traded the early spring bar scene for a night of keeping drunks on dry land.

It’s another attempt to save lives in this river city, which has struggled for years to break a string of alcohol-related drownings. Since 1997, 10 college-age men, all with eye-popping blood-alcohol percentages, have died in La Crosse rivers. At least 20 other people have nearly drowned over the last decade, many of them after drinking.

Local leaders have tried passing new ordinances, but in a community where Wisconsin’s love affair with booze is on full display, the memory of each drowning fades with the next round of shots, $1 beers and all-you-can-drink specials.

Finally, college students took it upon themselves to save their classmates. The effort dubbed Operation: River Watch has emerged as the city’s most effective safety net.

“It’s not the alcohol’s fault,” said Adam Bradley, a college senior who leads River Watch. “The alcohol has always been here. It’s the people. Right now a good number (of people) don’t want to take responsibility. … Hopefully we can have some kind of impact on the fatalities.”

La Crosse, a city of 51,000, stands in rugged bluff country about 140 miles southeast of the Twin Cities at the confluence of the Mississippi, Black and La Crosse rivers. It’s known for its natural beauty – and hard-core nightlife.

The annual Oktoberfest attracts drinkers from across the upper Midwest, and Third Street offers one bar after another. The scene is tailor-made for thousands of students who attend the city’s three colleges, the University of Wisconsin-La Crosse, Viterbo University and Western Technical College.

The area’s heavy drinking culture is reflected in government data. According to the Centers for Disease Control and Prevention, 23 percent of La Crosse County adults reported excessive drinking – defined as at least four drinks in a sitting for a woman and five for a man in a survey conducted between 2004 and 2010. That compares with 8 percent of adults nationally.

Drunken drownings aren’t unique to La Crosse. Since January, four young men have turned up dead in waters around Wisconsin after drinking. But nowhere else in the state have the deaths happened with such regularity. At one point, La Crosse residents were so alarmed they worried a serial killer was stalking young intoxicated men. It took assurances from the FBI to convince them the drownings were simply alcohol-fueled accidents.

The city outlawed public drunkenness and required anyone buying a keg of beer to register with authorities. But when UW-La Crosse basketball player Luke Homan become the eighth drowning victim in 2006, then-Mayor Mark Johnsrud said he wasn’t sure what more could be done.

Days after Homan’s death, the UW-La Crosse Student Senate presented plans for a student safety patrol in Riverside Park. All three campuses endorsed the plan, and the city agreed to bolster the effort with police cadet patrols in the park. Downtown tavern owners raised money for the effort.

The Sigma Tau Gamma fraternity took over the operation in 2007. A mix of fraternity members, other students, volunteers and cadets have patrolled the park on weekends for roughly the last five years.

Records show the patrol intercepted nearly 1,300 people in the park after hours last year. Police cadets encountered nearly 3,600 people between 2009 and 2011, although it’s not clear in either figure how many were intoxicated.

Some accidents have persisted. Since River Watch began, two college-age men have drowned after drinking, although both went into the Mississippi outside Riverside Park.

The cadets and River Watch patrollers aren’t trained rescuers. If they encounter a situation they can’t handle, they call for help. Police credit River Watch and the cadets with helping with nearly 10 rescues between 2007 and 2011.

One of the most harrowing came last June, when a cadet saw a 42-year-old Minnesota man jump into the Mississippi. Sheriff’s Deputy John Williams responded and jumped in after him, but both got caught in the current. The man climbed on top of Williams, pushing him under, and a boater had to rescue both of them. The man’s blood-alcohol content was 0.20 percent – more than twice the legal limit for driving.

“He just had a look on his face. Just completely terrified. He thought he was done,” Williams said.

On a recent March evening, Bradley and three friends encountered eight people shortly after the park closed. All of them left without incident.

The group spent the next few hours trudging around in a drizzle. Bradley passed time by musing on why drunks keep falling in the river, concluding that many are so blitzed they don’t know where they are. He once encountered a man who thought the Mississippi was Lake Michigan.

Mayor Matt Harter, not far removed from college himself at age 27, called River Watch a “positive” tool. Still, he downplayed the binge drinking culture, saying alcohol habits in La Crosse are no different than elsewhere. The CDC survey bears that out. More than half of Wisconsin counties have an excessive drinking rate as high or higher than La Crosse County’s.

“The geography is different,” the mayor said. “If we had a parking lot there instead of a river, (the drownings) wouldn’t have happened.”

Health advocates are still working to change people’s attitudes. A “College Survival Tips” poster hanging on the UW-La Crosse student center wall warns people to “Avoid Partying Too Hard.” A coalition of hospitals, addiction specialists and the colleges has spent more than $500,000 on programs to discourage binge drinking. Last year, police took 62 people to detox facilities, the first year since 2007 they transported fewer than 120.

“We’re trying,” said Sue Danielson, Viterbo’s health services director. “But Wisconsin’s a tough state. Look, we can’t even get the beer tax increased since the ’60s. We have a drowning, and people say we have to do this, this and this. But after a year, it’s out of your memory and things get lax.”