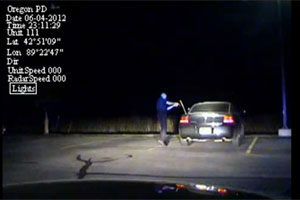 MADISON, Wis. — Two adjacent public-safety departments in Dane County are at odds after a firefighter says he was subjected to excessive force by a police officer from a nearby village while trying to respond to a fire call.

Dean had just sped to the station in his private vehicle after being paged. Gilbertson began pursuing him several miles out, apparently in response to an earlier call elsewhere in the county of a motorist possibly impersonating a police officer. Both Dean and Gilbertson were using lights and sirens.

Dean filed a $50,000 claim against the village of Oregon. The Oregon Police Department earlier dismissed his formal complaint.

The department’s internal investigation cleared Gilbertson of wrongdoing and accused Dean of recklessly responding to a non-emergency.

Dean was cited for failing to yield to an emergency vehicle. He is contesting the ticket.

The call ended up being a refrigerator fire.

The case hinges on whether Dean should have stopped for the officer and whether Gilbertson was justified in drawing his firearm.

By the time the two vehicles pulled into the station, a bay door was open and other firefighters were arriving, so the situation should have been clear to the officer, Dean said. Also, according to an in-squad video of the incident, the officer learned before drawing his gun that Dean’s vehicle had a state-issued Emergency Medical Services plate.

The dashboard video, made available to the State Journal by the Oregon Police Department, shows Dean getting out of his car, then being ordered by Gilbertson to “Get back in the car” and “Get your hands out the door, right now, both of them.”

Gilbertson then approached the car with both hands on his pistol and appeared to hold the gun close to Dean’s head. Dean can be heard apologizing and explaining he’s a Brooklyn firefighter.

“Our officer, acting in good faith, thought he was involved in a high-speed chase,” Clark said in an interview. “At the end of such a pursuit, an officer is to treat the situation as a high-risk traffic stop and use an appropriate level of force until the situation is deemed under control, which is what our officer did.”

Clark’s written report faults the firefighter for acting without “due regard” for public safety. The call went out as an “Alpha-level” page for an “odor investigation.”

According to Dane County policy, Alpha-level calls are non-emergencies and should be answered with “no lights, no siren (and) normal driving conditions,” Clark wrote.

“I feel that you not only compromised your own safety, but you also put the safety of the public and other responding police officers in harm’s way,” Clark wrote.

The video shows Dean using his turn signals at intersections and stopping for stop signs. Gilbertson, at one point, crosses over a double-yellow line near the top of a small rise as he passes another vehicle. The video also captures Gilbertson’s speed, which reached 101 mph early on as he initiated the pursuit and tried to catch up with Dean.

“If anybody did something wrong, it was the Oregon officer,” said Brooklyn Fire Chief Phil Mortensen, who backs his firefighter. He estimates Dean’s top speed at around 65 mph.

Brooklyn firefighters are urged to use their own discretion in determining how quickly to respond to information given out on a call, Mortensen said. The refrigerator fire was minor only because firefighters extinguished it before it spread, he said.

Dean responded to the call in a manner consistent with others, said Sarah Grapentine, Brooklyn’s EMS training officer. Six of the eight other firefighters who responded that night also used lights and sirens, she said.

Oregon has 120 days to respond to the claim, dated Sept. 19. Dean said he plans to file a lawsuit if the claim is denied.

Dean said he put the $50,000 figure in the claim only because the Oregon Police Department wasn’t taking his concerns seriously. He said he would forgo any monetary compensation if the police department apologized and added an additional day of officer training annually on gun safety and emergency vehicle operation.