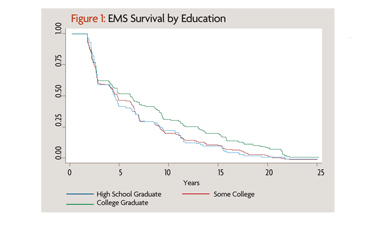 Bill in Ohio posed a question to our mythbusters. He’s been an EMS educator for more than 20 years and is concerned that EMS is losing all of its high-performing students. “Those people who do well probably go on to be doctors, nurses and physicians assistants” or otherwise leave EMS, he wrote.

What We Know
This was actually a hard myth to bust. We needed to define a high-performing student. When coming up with this definition, we needed to think about what we have access to. Of course, we would love to include IQ, motivation, SAT scores, high school class rank and brown-nosing abilities. But research is a lot like working in the field — we only have certain resources available. As you all know by now, we work for the National Registry, and the numbers we had to work with to bust this myth were NREMT exam scores and education level. So, as we would do in the field, we’ll use what we have.

There aren’t many readily available sources of data with which we can determine how long an individual has worked in EMS. But what we could do was look at only states that have mandated maintenance of NREMT certification over the past 20 years. By definition, if you gave up your NREMT certification in these states, you also gave up your state license. We used NREMT re-registration data to determine exactly when an individual left EMS. And we chose the 20-year range because we figured that was the length of a typical career, and this would allow us to determine if individuals left early or retired from EMS. We analyzed only paramedics, because there just aren’t enough states that mandated re-registration at the EMT-B level for a long enough period of time. But remember, we love EMT-Bs just the same.

Once we had our study population, we needed to figure out how to attempt to bust this myth. In order to determine probabilities of “surviving” in EMS or leaving, we used the same statistical methods that have been used in clinical research to determine if patients who were given a placebo survived longer than those who were given the study drug. It’s called “survival analysis,” and before you turn the page, we promise we’re not going to begin a tutorial of the statistical theory behind this type of analysis, because frankly, it’s a little boring.

We had our study population and the statistical method. All that was left to do was what we do best — try and bust the myth. We categorized the NREMT scores into quartiles, so that 25% of the grades were in each category. Figure 1 is the survival curve, which demonstrates EMS survival by exam score with a quick tutorial on how to read these graphs.

Those lines in Figure 1 don’t look very different. Take a look at how often the lines cross. Also, pay attention to how close together those lines are. Just by looking at this graph, you can make a fair assessment that, in this population, score on the initial certification exam had no bearing on survival in EMS. You can determine the exact significance level through further statistical methods, but we’re not going to do that here. First, there’s a lot of statistics involved, and we don’t want you to fall asleep on us. Second, the graphs are pretty easy to follow. Third, this is a good starting point for you budding EMS researchers to take this topic, put a little more statistical rigor in it, and run with it.

Now, let’s look at the second metrics we had access to — level of education. We categorized individuals as having graduated high school, completed some college or graduated from college. Figure 2 shows the probabilities of surviving in EMS by education level. As you can see, the lines in Figure 2 look very similar to each other. They’re close together and cross at many points. It appears there’s no difference in EMS survival by level of education as well.

What We Don’t Know
The first thing we need to discuss is our definition of high-performing students. Of course our definition is not all-encompassing. Many other variables may contribute to a student’s performance, such as some of the measures we mentioned above. Also, just because someone has a higher level of education, it may not necessarily mean they’re a better student.

Another thing that’s important to address is the individuals in this study who left EMS. It’s very possible that some individuals who did not re-register simply moved to a state that did not mandate NREMT re-registration. Therefore, they may not have actually left the field but are simply working in another state.

As always, it’s important to keep in mind that we’re looking at a specific population of EMS professionals. The individuals we assessed obtained their initial paramedic certification in 1987, and they all lived in states that utilized the NREMT for initial certification and mandated NREMT re-registration. It’s possible that these individuals are different from other EMS professionals or those in your community. Unfortunately, the NREMT database is the only readily available data source available to help us bust this myth.

Finally, the graphs we present are informative in reference to our myth. However, they don’t tell us any information about why people leave. As we mentioned above, they may have simply left the state. For those who truly left the field, we don’t know if they left to become doctors or nurses, they were injured or they simply burnt out.

Bill, you can rest easy; it doesn’t appear that survival in EMS is related to student performance.JEMS

Antonio R. Fernandez, MS, NREMT-P, is a research fellow for the National Registry of EMTs. He’s currently pursuing a PhD in public health. Fernandez also has experience providing prehospital as well as in-hospital patient care as an EMT-B and a paramedic in urban settings.

Melissa Bentley, BS, NREMT-P, is a research fellow at the National Registry of EMTs and is pursuing her master’s in public health. She’s been involved in EMS for three years.

For more on the EMS workforce, read Ë™Workforce Priorities’ at jems.com/jems/news_and_articles/jems/3402

This article originally appeared in June 2009 JEMS as “Will You Stay or Go?: Are high-performing EMS students leaving the field?”