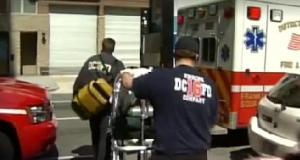 DC School Assistant Press Secretary Fred Lewis says four of the students who received the cocaine ingested it by eating it while others sniffed the cocaine. School officials don’t know how much each student ingested.

The teacher spoke with the student who brought the cocaine and alerted the main office, says Lewis. The school nurse evaluated four of the students, who were taken to the hospital “as a precaution,” added Lewis.

Lewis says the fifth student, who did not ingest the drug, was also transported to the hospital as a precaution.

All of the children are reportedly okay.
School officials notified parents of the students involved and met a group of parents after school to address concerns. A letter was also sent home. School is not in session Friday because it is a teachers’ day, but counselors will be at the school on Monday to talk about the incident with students and teachers. According to Lewis, the counselors talk about the dangers of drugs and offer advice on drug prevention.

The student who brought the cocaine to school has been charged with possession of a controlled substance. The Office of Attorney General will determine how to proceed with charges the charges due to the student’s age.