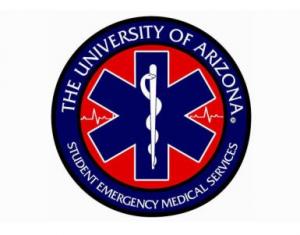 Whether it’s a bicycle collision or difficulty breathing, the UA community can count on quick help from students trained and certified as EMTs.

The University of Arizona Student Emergency Medical Services, or UASEMS, group has been operational for three semesters and provides assistance in medical emergencies. Its leaders emphasize thorough training and certification.

“We’re students at the UA who happen to be EMTs. We’re not student EMTs,” says Derek Smith, manager of UA Student Emergency Medical Services and a non-degree-seeking graduate student.

When Brandon Murphy arrived at the UA three years ago, he didn’t find any options for students to work in EMS on campus. He met up with two other students – who’ve since graduated – to begin brainstorming a program that students could run. They looked at other universities that have student EMS programs and modeled a club after the best practices they found around the country. It took two years to work through the administration and risk management officials, but they were able to start as a club with ASUA funding and began responding in spring 2012.

UASEMS switched to funding from the student service fee and began expanding hours in fall 2012. As the fall progressed, the group did too, taking on additional days until they were operating from 6 p.m. to 6 a.m. seven days a week.

UASEMS this year was the sole EMS provider at the Tucson Festival of Books, saving the festival $4,000 by not using the Tucson Fire Department. UASEMS also works stand-by at Spring Fling, football games and tailgating and when requested for special events, like the Susan G. Komen Race For The Cure.

“Anything that occurs on campus, we can be there,” Murphy says. “Our members do get put into emergencies where they’re the only person there, so we make sure they’re held to the same certification. We weren’t going to settle for a CPR certification or anything else. We make sure everyone has state certification.”

UASEMS finished the semester with 32 student members, most of whom are certified Emergency Medical Technicians, with the same Arizona training and certification as a Southwest Basic Life Support Ambulance. Two EMTs staff each 12-hour shift, sometimes along with an additional Certified First Responder, and typically respond to at least two calls for service. On its busiest day, UASEMS responded to 12 calls in a 24-hour period.

“It’s part of our emergency mission to provide a quick, rapid response and be the first to provide care until further medical care arrives,” Murphy says.

By checking vital signs and reporting to paramedics, the student EMTs can eliminate a step and save valuable time if a patient needs to be taken to a hospital.

“There are calls where we take the blood pressure while waiting for TFD and give the information right to them so they can load and go. They appreciate it,” Murphy says.

Many students join out of an interest in a future medical career, some have even gone on to medical school already, while others are considering EMT as a career. Interest is growing; the group has received 80 applications since the fall that they haven’t been able to accept. They’re hoping to take on as many as 10 in the fall and hope to expand to providing EMS service around the clock, seven days as week.

UASEMS has a golf cart and two bicycles, all equipped with emergency gear. UAPD ride-alongs are a mandatory part of the orientation, which includes 20 hours of vigorous bike training and instruction on bloodborne pathogens and health privacy laws. The members participate in monthly continuing education courses and perform mock drills during the week.

“It’s real-life, in-the-field experience they can’t get shadowing somebody in a hospital,” says Murphy, a junior in communications from New Jersey. “Here, you’re set to a standard and you have a responsibility. That is your patient until further medical attention arrives.”