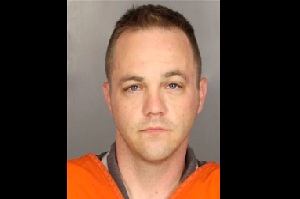 WACO, Texas (AP) – A first responder who helped evacuate people ahead of a deadly explosion at a Texas fertilizer plant pleaded not guilty Wednesday to a charge he possessed bomb-making materials.

Bryce Reed was arrested last week and indicted Tuesday on a charge of possessing an unregistered firearm. Authorities have not announced any link between Reed and the April 17 blast in West, Texas, which killed 14 people.

Federal investigators allege Reed had materials for a pipe bomb that he gave to someone else. An agent from the Bureau of Alcohol, Tobacco, Firearms and Explosives wrote in a court filing that other investigators told him Reed admitted to having the bomb parts.

Reed’s attorney, Jonathan Sibley, said that he agreed with prosecutors to postpone a previously scheduled detention hearing, but would not comment on why. Reed remains in custody.

“We dispute the allegations against him,” Sibley told reporters outside the federal courthouse in Waco, about 15 miles south of West.

He also called on federal authorities either to present evidence connecting Reed to the explosion or to say he wasn’t connected. The McLennan County Sheriff’s Office said Friday that no evidence suggesting a link has been found so far.

ATF and the Texas State Fire Marshal’s Office are scheduled to release findings of their month-long investigation Thursday afternoon.

“The investigation is ongoing and it would be premature to speculate at this time,” ATF spokeswoman Franceska Perot said Wednesday.

Reed became a well-known media figure after the explosion, talking at length about his relationship with Cyrus Reed, a first responder killed in the blast. Although the two weren’t related, Bryce Reed frequently referred to Cyrus as his “brother” during interviews and an emotional video played during the memorial for dead first responders at Baylor University.

“My brother and all those who lay with him are heroes now and forever,” Bryce Reed said.

However, Cyrus Reed’s family members have since said they believe that Bryce Reed wasn’t as close to Cyrus as he let on and may have been using the similarity in their names to increase his public profile.

In brief comments to The Associated Press on Tuesday, Cyrus Reed’s mother, Lucy Reed, said the family met Bryce for the first time at the April 25 memorial.

“No comment except Bryce is not my son,” she said.

Although Reed portrayed himself as a West EMT in the Baylor video and other public appearances after the explosion, he was in fact dismissed two days after the blast, records show.

At least two of the educational institutions listed by Reed on his LinkedIn profile page – the University of Phoenix and the University of Texas Southwestern Medical Center – say they have no records of him being enrolled.

In an email to the Texas Department of State Health Services last Friday, Christine Reeves of the Heart of Texas Regional Advisory Council wrote that the West EMS administrator, Tom Marek, “asked that I contact you guys that Bryce Reed does not volunteer for West EMS” and was “let go” on April 19.

Marek declined to comment Wednesday. Reeves told the AP she wasn’t informed of a reason for the dismissal.

Reed has been a licensed EMT since 2005 and has worked for at least one other agency, an air ambulance service, state records show. No complaints have been lodged against him, and no disciplinary action has been taken, the records show.

Carrie Williams, the spokeswoman for the Texas Department of State Health Services, said the agency initiated an investigation into Reed’s license as a result of his arrest. Such investigations are standard procedure when the department learns that an EMT is charged with a felony, she said.