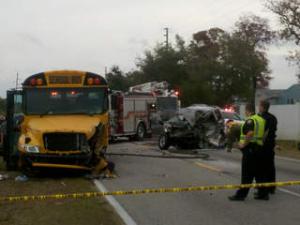 HOLIDAY, Fla. – At least 13 middle school students were injured when a school bus and a vehicle collided Wednesday morning in Holiday, according to authorities.  The injuries are said to be non-life threatening.

The driver of the vehicle, an Isuzu Trooper, was “gravely injured,” according to officials.  The bus driver was also injured.

The bus was headed to Paul R. Smith Middle School when the crash occurred at Sweetbriar Drive and Anclote Boulevard around 8:30 a.m.  There were 35 to 40 students on the bus.

The front end of the bus is badly damaged and the Isuzu is totaled.

The Pinellas County Sheriff’s Office will be handling the investigation because the crash occurred on the Pinellas side of the county line.

At least one of the injured was taken to Bayfront Medical Center as a trauma alert.  Authorities have not identified that person.  The rest of the injured were taken to several other hospitals not far from the scene of the accident.