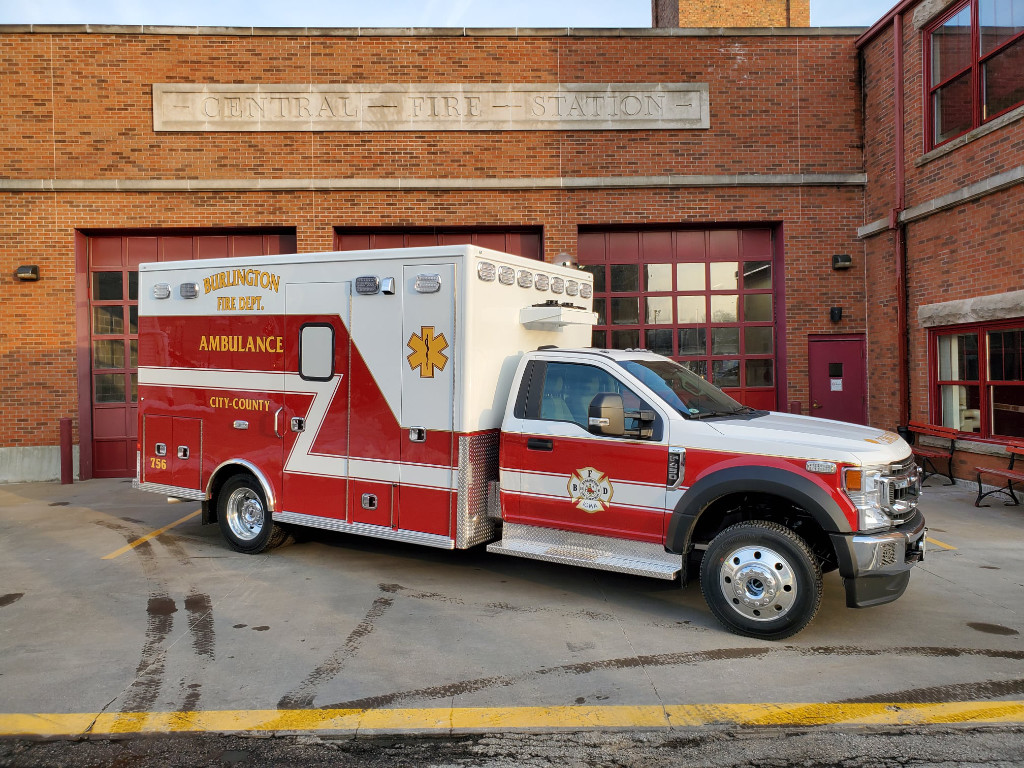 Paramedics and firefighters swarmed the parking lot of Burlington High School on Thursday in an effort to rescue “Randy” from a car that had been T-boned by a vehicle traveling 25 mph.

The accident occurred some time ago. Randy isn’t a person, but a 160-pound plastic dummy the Burlington Fire Department uses for simulation training.

Health science students watched as firefighters worked for about 20 minutes to pry open the driver’s-side doors of the vehicle, which was donated by Beckman’s Towing. They carefully extracted Randy and placed him on a stretcher, administered CPR and loaded him into the back of an ambulance.

Meanwhile, the whirring of a helicopter grew nearer, prompting students to look skyward. It wasn’t long before MedForce landed in the soccer field. It took only about five minutes for Randy, who was showing signs of internal bleeding, to be wheeled from the ambulance to the chopper, and then the dummy was airborne.

“I wanted (students) to see what an actual emergency would look like,” said Jill Smith, who has been teaching health science classes at BHS and West Burlington High School since the schools rolled out their health science career and technical education strand program in 2018. “My ultimate goal is obviously to educate these students on what’s out there for them, but I also want to provide them experiences. So I thought, what better way to do it than provide them with this experience?”

In previous years, Smith has taken her students on field trips to hospitals to give them an up-close look at career opportunities in the health field. COVID-19 made those outings impossible this year. So she reached out to Mark Long, a flight medic and public relations coordinator for MedForce, about the helicopter and its team making an appearance.

Long called on Nathan Skifstad, a paramedic for the Burlington Fire Department, and the two took it a step further by organizing and executing a full trauma simulation for the students, demonstrating how to respond to an emergency as well as introducing them to a variety of careers.

As his colleagues worked to free Randy, Skifstad explained to about 50 students gathered outside what actions paramedics and firefighters were taking and why, as well as how to look for clues at the scene to help determine the nature and extent of injury. A bent steering wheel, for example, could indicate severe head trauma.

He also told them communication is vital when responding to the scene of an accident or other emergency.

He told students how they can become a Burlington firefighter. Applicants must be 18 or older and have a high school diploma or equivalent. After passing a written and agility exam, the BFD will cover the cost of its hires to complete Southeastern Community College’s EMT program, which takes one semester, and paramedic program, which takes a full calendar year and has a 100% pass rate for BFD employees. Firefighters also must complete a seven-week firefighting academy in Champaign, Illinois.

Zakiyah Timmons’ face lit up when she learned her chronic lung disease would not disqualify her from fulfilling her lifelong dream of becoming a firefighter, so long as it doesn’t prevent her from passing the agility exam.

“I wanted to be a firefighter all my life, because I grew up watching ‘Chicago Fire’ and stuff like that, but I never thought that I could because of my lung disease,” said the 16-year-old junior, who is enrolled in Smith’s Introduction to Patient Care 2 and SCC’s Certified Nursing Assistant course. “Finding out that I actually can is more than I could have even asked for.”

Smith was glad to see her students’ interest.

“I’ve got some kids really gung-ho about health care,” she said toward the end of the class period.

About a dozen students continued to speak with first responders while others made their way to their next class.

Skifstad said Thursday’s simulation was the first of its kind put on by the BFD and MedForce, and he hopes to make it an annual event.

7.9.2021 0
An awards ceremony was held this week for a woman who saved her neighbor's life with CPR during a cardiac arrest event a few months ago.