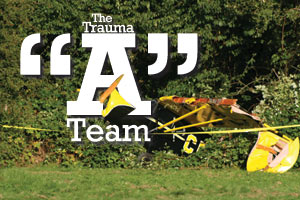 In February 1976, Jim Styner, MD, FACS, an orthopedic surgeon, crashed his small airplane in rural Nebraska. One of his children had only minor trauma, but three were critically injured. Styner’s wife was killed instantly, and he was severely injured. They all received inadequate care at the receiving hospital, stemming from the lack of proper education of the receiving emergency department (ED) staff regarding early trauma management.1

It may be hard to believe, but when Styner and several family members were finally rescued and taken to the closest hospital, the ED door was locked and the “night nurse” had to call in doctors who were on call from home.1

When they arrived, one general practitioner picked up Styner’s son by his shoulders and knees and carried him to the X-ray room for X-rays of his injured head. It was clear to Styner that the doctors and staff at the small rural hospital had little or no preparation for the multiply injured patients they had thrust upon them.1

Styner was later quoted as saying, “When I can provide better care in the field with limited resources than what my children and I received at the primary care facility, there is something wrong with the system, and the system has to be changed.”1

And indeed, the system was changed. In 1978, he and several colleagues held the prototype Advanced Trauma Life Support (ATLS) course in Auburn, Neb.1

The American College of Surgeons (ACS) Committee on Trauma launched it nationally in 1980. The ATLS course evolved naturally from the mission of the ACS, which was founded in 1913 to raise the standards of surgical practice and improve the care of surgical patients.

Very shortly after the successful introduction of ATLS for physicians, Norman McSwain, MD, first chair of the ACS ad hoc committee for ATLS, started advocating for a similar course for EMS personnel. Working with the National Association of Emergency Medical Technicians (NAEMT), he created a curriculum that became the Prehospital Trauma Life Support (PHTLS) course.

Like ATLS, PHTLS has grown to a thriving international enterprise as a division of NAEMT partnered with the ACS Committee on Trauma to provide medical direction. Thousands of participants take the course each year. The seventh-edition PHTLS texts and programs will be rolled out next month. In addition to the civilian and military texts, there will be, for the first time, a “PHTLS Trauma First Response” text geared toward EMS providers and other emergency responders.

How ATLS Works
As with other life support courses, ATLS offers hospital-staff-validated, standardized, concise ways to assess and resuscitate multiply injured trauma patients while acknowledging the potential existence of other acceptable approaches based on the patient’s and practitioner’s needs.

Part of the course’s success lies in its simplicity of methodology, at the heart of which is an easily remembered algorithm that’s become the touchstone of trauma management by other programs. ATLS also provides a scaffold for evaluation, treatment, education and quality assurance–in short, a system of trauma care that’s measurable, reproducible and comprehensive.4

ATLS training participants are presented with information that enables them to:
1.  Assess the patient’s condition rapidly and accurately.
2.  Resuscitate and stabilize the patient according to priority.
3.  Determine if the patient’s needs exceed a facility’s capacity.
4.  Arrange appropriately for the patient’s interhospital transfer (who, what, when and  how).
5.  Ensure that optimum care is provided and that the level of care doesn’t deteriorate at any point during the evaluation, resuscitation or transfer process.4

The course remains contemporary and current by issuing updates every four years. Breaking with a traditional approach, which involves heavy reliance on expert opinion coupled with literature reviews, for the 2008 revision, the authors adopted an evidence rating system that ranked published studies submitted as suggestions for change on a scale of 1 to 5. A ranking of 1 was the highest rating, indicating that a study met rigorous research standards. A rating of 5 indicated expert opinion only.

This framework, published by Wright, et al, in 2003, had been adopted by prominent journals, was easily interpreted and appeared to have a high degree of reliability.2 The process was highly successful in gaining buy-in from the international trauma community.

Cases
The following cases illustrate how ATLS training and information helped guide care and influence treatment and transportation decisions in the field and in the hospital:

One Million Strong & Growing
Throughout the 1980s, Canada, Trinidad and Tobago, Chile, Mexico, the U.K., Australia, Brazil and Argentina adopted the common language and approach of ATLS. Today, there are 16 regions covering every state in the union; the U.S. and Canadian military through the ACS Military Committee on Trauma; and 52 foreign countries on every continent under the International ATLS subcommittee, which is led by John Kortbeek, MD, FACS, FRCSC. Currently, more than 60% of ATLS students are outside of the U.S. and Canada.

To date, more than one million participants have completed the ATLS course. Although designed for physicians, the ATLS subcommittee, chaired by Karen Brasel, MD, FACS, approved a rule revision at their March 2010 meeting allowing advanced practice nurses and Special Forces medics to participate as physician extenders.1 Nurse practitioners and physician’s assistants had previously been approved as physician extenders. Auditors are allowed on a space-available basis and are given a nonphysician’s certificate of attendance, but are not granted the credential and are not included in instructor/student ratios.

Despite universal acclaim, ATLS continues to improve its courses and materials. The evidence for change for the eighth edition of the course was published in the Journal of Trauma in June 2008, and a ninth edition is in the works.2 In addition to medical updates, new information was added with respect to principles of disaster management.

Summary
We know each team member must perform with precision to best practice models to reap optimal outcomes for seriously injured trauma patients. Key players may include professional and support staff in the ED, trauma and specialty physicians and staff throughout the hospital and rehab facilities. Every health-care professional who touches one of these patients directly or indirectly is an essential link in their recovery.

Therefore, if critical clues are missed that suggest significant injury and the need for timely and appropriate trauma interventions, optimal decisions and care may not result. The ATLS course helps ensure that physicians and physician extenders are trained to make the proper decisions relative to our patients.

This update was intended to give you an appreciation for the benefits provided to patients managed by practitioners in multiple disciplines that have been educated in ATLS. This training helps fill educational gaps with respect to trauma management, provides evidence-based recommendations for contemporary practice, and ultimately improves the treatment and transfer decisions for our injured and wounded. JEMS