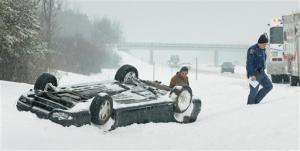 EASTON TOWNSHIP, Mich. (AP) – Authorities say a snowstorm pushing through Michigan contributed to the crash of a school bus in western Michigan, injuring one student.

Thursday afternoon’s crash was one of a number of accidents caused by a storm expected to bring up to a foot of snow in parts of the state. Many schools are announcing closings Friday.

Sheriff’s officials say an Ionia Public Schools bus was unable to negotiate a curve in Ionia County’s Easton Township, ran off the road and rolled onto its side.

The driver and five students were on the bus. One student sustained minor injuries.

The National Weather Service forecasts six to 12 inches of snow north of Interstate 96 in the Grand Rapids area. It says six to 10 inches could fall in the northern Lower Peninsula.