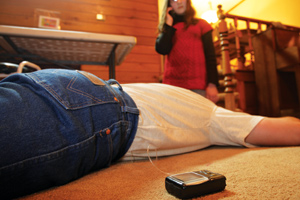 Diabetes mellitus affects nearly 7.8% of the U.S. population, with approximately 5—10% of this group affected by Type I and 90—95% by Type II.1 Diabetes is the most common type of endocrine disease and was the seventh leading underlying cause of death listed on death certificates in 2006.(1) According to Centers for Disease Control and Prevention (CDC), 223,619 deaths were attributed to diabetes in 2005.

It’s important to train and educate students of prehospital care on key indicators of a diabetic emergency. A patient with Type I diabetes will often have symptoms related to blood sugar imbalances that appear abruptly with polydipsia, polyuria, polyphagia and rapid weight loss. Blood sugar issues in the Type II diabetic will have a gradual onset, with diagnosis generally resulting from routine laboratory exams.(1)

A patient presenting with altered level of consciousness and a blood sugar level below 80 mg/dL should be considered hypoglycemic, and treatment modalities should be consistent with those for a diabetic patient.

The Theory
A hyperglycemic patient may present with tachypnea, which often presents as Kussmaul’s respirations, tachycardia, orthostatic blood pressure changes and other signs of dehydration and diabetic ketoacidosis (DKA). DKA can develop within 24 hours and is potentially life threatening, requiring prompt recognition and therapeutic intervention.(1)

The assessment of a diabetic patient is best taught as a case-based simulation. A traditional classroom lecture format allows for student participation but limits the instructor’s ability to create realistic situations. This environment doesn’t allow the student to identify presentation cues, be active in their own learning or apply their skills without endangering the lives of patients.(2)

Instead, instructors should combine case- and simulation-based techniques when teaching diabetic assessment. Case-based education adds a real-world aspect to the learning environment. The use of simulation-based instruction enables a student to learn at their own pace and allows them to repeat sequential steps to gain confidence and proficiency.

During the debriefing process that follows the simulation, well-balanced performance measures will guide feedback toward accomplished tasks and may illustrate existing decision-making, behavioral or technical skill deficits.

Instructors should write a case study for the simulation before the session. The patient synopsis should include such standard aspects as age, sex, ethnicity, medical history, medications and allergies. Other details are also important, including descriptions regarding patient language skill, social history, socioeconomic history, family history, religious practices or beliefs pertinent to treatment, and descriptive signs and symptoms. An events progression section should include patient status changes, as well as a time/treatment continuum that incorporates “if-then” event progressions.

For example, you could develop a diabetic scenario in which the prehospital provider encounters an altered patient with incomprehensible speech. The scenario would include an if-then algorithm. Example: If the provider immediately evaluates blood glucose, then the reading will display 45 mg/dL.

Another example: At one minute into the scenario, the patient becomes unresponsive and their breathing becomes shallow. If the provider starts an IV and gives dextrose, then the patient’s alertness will increase, respirations will normalize and repeated blood glucose will read 210 mg/dL over a two-minute interval.

Note that if-thens must also include negative patient outcomes for when the provider doesn’t take appropriate action.

The Pratcice
Several environments may be suitable for your classroom. Let’s discuss your options.

Animated Lecture
An animated lecture may be described as a pseudo-simulation environment. This is a combination of the modified traditional lecture within scenario-based learning. A strong emphasis is placed on the focused, methodical examination of a specific medical problem and the decision-based treatment options available. It involves a facilitating instructor, a small learner group and conceptual aspects of environmental and manikin staging to provide sensory cues.

One advantage to the animated lecture style is the ability to introduce treatment options in a methodically guided approach that’s in conjunction with simultaneous environmental stimulus. The lecture allows for understanding of concepts prior to action, and instructor feedback is immediate.

Animated lectures, however, must work within the framework of a focused case study, which requires increased preparation time. This style also doesn’t mimic an actual scene, and a student may feel that treatment modalities and skills are performed at a slower rate than real-world applications.

Environment & Manikin
Experience has shown that the more experienced the provider, the more detailed the environmental and manikin staging should be, because providers are trained to take in and interpret visual cues as indicators of patient status. A well-staged environment allows for greater student buy-in.

The learning environment should closely mimic real-world applications. For example, if a student is to run a diabetic emergency in an extended living facility, the room should be staged with the appropriate bed, linens and medical equipment, and include personal artifacts and memorabilia normally found in such environments. The objective is to give as many visual and tactile cues concerning the patient condition and background as possible.

For diabetic assessment involving DKA, staging may include the use of a container with a small amount of acetone placed near the manikin because many students may not know what acetone smells like but will expect to smell something. You could also ask a student to smear a small amount of acetone on a piece of glass to see how volatile it is, helping them understand why it’s being exhaled by the DKA patient.

Classroom Dynamics
The optimal number of simulation participants is four to seven individuals, depending on the case study objectives. Groups of more than seven may struggle with meeting objectives due to insufficient functional rolls. Groups of fewer than four students don’t allow for optimal collaboration.

The instructor’s role is to facilitate active learning through a combination of learning styles. They should introduce the student group to the environment, assign roles for each learner and guide the decision-making process. Prior to starting the scenario, the instructor should introduce a short summary of the case study and ask open-ended questions regarding the management direction.

The student group should be encouraged to collaborate on management options and to perform skills. In keeping with the case study, as a treatment marker is reached, the instructor should place emphasis on physiological, pharmacological, environmental and psychosocial issues.

When a group treatment decision is made that would be contraindicated or harmful to the patient, the instructor can redirect the learner group while maintaining an atmosphere inclined toward independent thinking.

Immersive Simulations
The immersive simulation is performed when the instructor feels comfortable with the acquired knowledge and skill base presented in the animated lecture or when the student group has sufficient practical experience to apply the cognitive, behavioral and technical skills outlined in the case scenario. As with the animated lecture, the simulation is strongly dependent on a focused case study.

The student group is given a short introduction into a closed simulation environment. After entering the environment, the student doesn’t have the option of leaving the simulation until the learning objectives and performance measures are achieved.

When erroneous treatment is delivered, the instructor can end the simulation. It’s best, however, to allow the student group to continue so they’re able to evaluate their decision-making processes during debriefing. Depending on scenario complexity, team dynamic and treatment modalities, this simulation may take 10—20 minutes.

Debriefing
Immersive simulations are mentally exhausting because they create an intense and stressful atmosphere requiring the learner to work outside their comfort zone. It’s absolutely necessary to follow all immersive simulations with a positive, emotionally safe and nonjudgmental debriefing environment. The debriefing environment should be removed from the location where the simulation took place. This allows the learner group to make a psychological break from the patient and environment while beginning the reflection process.

Often, the learner group will be unaware of these behaviors, but the instructor can key into the first few comments made during the transition between rooms. The instructor can also gauge the direction the debriefing session should follow or be alerted to possible problems or conflicts in treatment opinions. A debriefing section with pre-established questions allows the instructor to review the main focus and performance measures with the student group.

Conclusion
The teaching of diabetic assessment and management, like many other medical emergencies, lends itself well to case-based simulation. The use of case-based simulation, although more complicated and time consuming for the instructor, immerses the students in the subject matter. This may produce better retention of the subject matter and help students adapt to emergency scenes before going into the field. JEMS

Two abstracts related to sleepiness in the EMS workforce were presented at the National Association of EMS Physicians symposium in January. In the first, the authors expanded the National Registry’s Longitudinal EMT Attributes and Demographic (LEADS) study by resurveying 1,600 EMS workers about their sleepiness while at work. Forty percent of respondents reported excessive daytime sleepiness. The researchers found that long shift hours (â‰¤24hrs), working overtime and marital/relationship stress were strongly correlated.