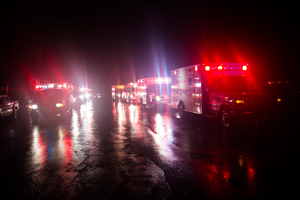 NEW YORK (AP) – The evacuation of some 320 patients was just the beginning of NYU Langone Medical Center’s Superstorm Sandy story.

After the rain stopped and the waters receded, the 700-bed hospital was a shattered mess: the emergency room had flooded, expensive diagnostic equipment was destroyed by the influx of brackish water and research projects were ruined when power was lost. The damage totaled an estimated $1 billion.

Unable to treat patients, doctors scrambled to get credentials at nearby facilities so they could provide care. Other hospitals made operating rooms available for NYU surgeons at night and on weekends. Nurses, medical students and other staffers were deployed elsewhere to help care for the displaced and continue their studies.

“We’re home,” said Chief of Surgery Dr. Stephen Hofstetter, the surgical scrubs and cap he wore to the reopening ceremony emphasizing the real significance of the day.

About 55 surgeries were scheduled for the first day back in business – a little more than a third of the 150 cases typically handled each day. Surgery department chair Dr. Lee Pachter said they were starting slow, in part because it is a holiday week that usually has a lighter schedule.

“We’ll be running up rather quickly,” he said. He estimated that 98 percent of patients stayed with their NYU doctors despite the disruption.

While staff members recalled the harrowing evacuation – one story involved a 400-pound patient being carried by firefighters down 15 flights of stairs – hospital administrators and elected officials gathered to celebrate the extraordinary efforts involved in getting the hospital back in business so quickly.

“When we toured this this hospital six week ago, destruction was everywhere,” said Sen. Chuck Schumer, D-N.Y., to the crowd assembled in the now-gleaming lobby. “It was like something you’d see in a science fiction movie.”

Schumer, who helped secure nearly $150 million in federal aid to repair the facility, called the hospital’s quick recovery “a metaphor for all of New York and New Jersey after Sandy.” Schumer also helped usher through the Senate a $60.4 billion aid package for the region that includes more for the hospital to cover repairs and mitigation aimed at avoiding repeated problems in the future.

Kenneth Langone, chairman of the hospital’s board and a patient himself during the storm, called it “one more time a miracle happened in New York City.”

About 75 percent of the hospital’s services are up and running, and signs of construction and restoration are still visible. The emergency room remains shuttered. The hospital was at the start of a major emergency department expansion before the storm and will add storm-protection measures as part of the work. In the meantime, NYU hopes to open an urgent care center within a few weeks and to start accepting ambulances and trauma cases soon after that.

Maternity, pediatrics and several other services are due restart Jan. 14.