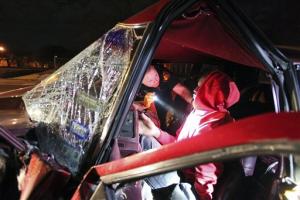 SAN ANTONIO (AP) – Kneeling next to Roxana Tenorio, officer Jose Garay told himself he would not let her die.

A car speeding the wrong way on Loop 410 after the driver fled a burglary had slammed into a motorcycle she was riding on with her husband. He didn’t survive the impact, but she still was breathing.

He is one of 36 San Antonio police officers in a unit that combines law enforcement and advanced life-saving techniques – a rarity among police departments nationwide.

Since the unit launched in 2010, officers have treated more than 360 people and at least 20 patients may have been saved, police statistics show.

“It was her femur,” Garay said about the September crash. “We have major blood vessels in the leg and the bones. When they break, they are like knives. So it’s like all those very sharp knives tore up her leg.”

EMS was just a couple of minutes away. But in trauma care, life or death can be measured in seconds.

Garay grabbed his medic bag. Mosquitoes buzzed around his face as he set to work putting a tourniquet on Tenorio’s leg, wrapping a collar on her neck and running an IV. When EMS got there, all she needed was a quick assessment.

University Hospital surgeons told Garay’s supervisors that without such quick care, Tenorio likely would have died.

Integrating military-style first aid, often referred to as “buddy aid,” into officer training is something more departments should do, said Alexander Eastman, a Dallas police lieutenant and trauma surgeon.

“To train them and make it a priority is a great example for other departments to follow,” he said.

Of the department’s more than 2,300 sworn officers, 35 men and one woman make up SAPD’s Tactical Medic Unit. They attend SWAT school, are certified with the National Registry of Emergency Medical Technicians, maintain a Texas Department of Health EMT license and are trained in current Tactical Combat Casualty Care standards.

“It really is an emphasis that they are law enforcement officers and that is their expectation,” said Dr. Craig Manifold, the medical director for the San Antonio Fire Department EMS Division and overseer of the program. “Secure that scene and make that scene safe … then transition to medic side.”

As part of the basic peace officer course, the state requires 16 hours of emergency medical training; and usually basic first aid and CPR is as advanced as it gets, said SAPD officer Richard Smith, who helps oversee the unit with Sgt. Edward Klauer.

Police usually partner with fire departments and train with those medics for high-risk situations, they said, but even then, EMTs or firefighters aren’t allowed to go into a hostile situation such as a shooting.

“It’s arming the pre-hospital (personnel) with tools to essentially take the technology further out from the hospital,” he said. “It’s a lot of work, but those of us that have done that believe it translates into lives saved and that’s why we’re here.”

Officer Gabriel Rosas was eating dinner at a nearby restaurant. He and another officer rushed to the club in about two minutes.

Another officer already had a suspect in custody and control of the scene.

Rosas used the skills he gained from two tours in Iraq as an Army medic and focused on how to best treat three people at once.

“The trauma here is more aimed at gunshot wounds that we can treat really well, as opposed to overseas with blast injuries,” Rosas said.

As he gave oxygen to the victim closest to death, Rosas instructed another officer and bystanders. Someone did chest compressions for one victim while others placed a special bandage on the second victim’s chest wound. Rosas also told a bystander how to apply pressure to the abdomen wound.

When the first EMS unit arrived within seven minutes of the call, Rosas gave its members an update and handed off the patient in the worst condition.

He continued treating the other two victims, including using an advanced lifesaving technique called needle decompression – inserting a 3¼-inch needle between the victim’s second and third rib – to help alleviate pressure from the gunshot wounds to the chest, he said.

Doctors reported that Rosas’ actions helped save two of the victims, according to his supervisors. One person did not survive.

The SAPD program is modeled after the Border Patrol Search, Trauma and Rescue Unit, or BORSTAR, and the Border Patrol was a critical catalyst, organizers said. The federal agents still do the tactical combat training for the officers.

Beginning in 1998 to curb deaths of illegal immigrants, BORSTAR agents are trained in various search-and-rescue techniques and tactical medicine, among other skills, according to U.S. Customs and Border Protection.

The agents also get their EMT certification.

Jason Wood, the Del Rio Sector BORSTAR commander, was on the team that created the federal program. Wood also helped train some of the SAPD officers. He said the idea for the city’s project began in 2009, when liaisons from the Border Patrol brought up cross-training.

The unit took a hiatus in 2010 so Manifold and the city could make sure officers wouldn’t be liable if they bypassed patients. They found they were on solid legal footing.

The extra medical resources the officers provide could be instrumental in a mass casualty situation, organizers said. In November, the unit trained for a movie theater shooting.

“Now you have officers that have knowledge on how to stop bleeding, stabilize fractured limbs, clear airways. … A lot of them are simple, but they are life-saving in traumatic incidents,” Wood said.

The driver was trapped.

His leg was crushed by the car’s dashboard, which had folded from the impact of slamming into the utility pole; his left arm dangled in his red sweatshirt sleeve, the bones creating an unnatural 90-degree angle.

Remmers was the first responder at the intersection where the car crashed. He assessed the situation before running back to his patrol car to grab his large black backpack.

The driver needed to be cut out of the vehicle, so Remmers could only make sure his neck was still. He would be the only patient on that shift.

“One week I had three patient contacts, but another time I went more than a month without treating anyone,” he said.

He was credited with helping save the life of a gunshot victim last year. The fact officers may not use skills regularly makes ongoing training paramount, Remmers said.

“Everyone thinks they’ll rise to the situation and be a hero,” he said. “But it rarely happens that way. You fall back on training.”

The upkeep of the team is a testament to the partnership between the Fire and Police departments, unit supervisors said. Both chiefs supported the implementation and ongoing training.

Aside from police and fire, the organization and communication among partners at the University of Texas Health Science Center, the Border Patrol and the military – combat doctors often help in training – has been instrumental in keeping the unit going, the organizers said.

And while the state EMS mandate for passing the course is a score of 70, the SAPD officers would get cut for anything below an 80.

Dr. Robert Bass, who oversees Maryland’s statewide trauma and emergency medical system, which includes first aid training for all police, said the struggle for any program is trying to balance officer duties and continued medical training.

Bass called the SAPD program “unique and very exciting” but added the department needs to make sure its getting the “right blend of investment vs. return.”

One key factor is that all the officers volunteered and were selected, said Klauer, the sergeant who helps oversee the unit, so they accepted the workload, extra training and the fact they don’t get incentive pay. The unit’s small size makes it easier to manage, he said.

Many of the members have been nominated for awards.