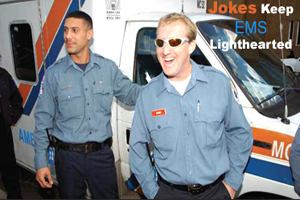 I looked everywhere around the office for my coffee mug —  the one that Sammy had painted for me for my birthday when he was three years old — but it was nowhere to be found. That wasn’t unusual for me — I’m always losing stuff, and it usually turns up sooner or later. Sometimes in the milk crate between the seats on the rig, in a classroom or on the shelf I had checked three times before. But this time, it looked like the mug with the brightly painted primary colors was gone for good.

And then I got the ransom note. It was left on my desk. There was a picture of The Mug chained to an old tire in what looked like a filthy basement or garage somewhere. Mr. Cuppy was being held hostage, but it wasn’t entirely clear what the ransom was. Perhaps his captors’ reward was simply my anguish.

And then I remembered where I left it. I had walked with a full cup of coffee over to a field supervisor’s meeting in the little white house that for decades served as the administrative office. I must have left it there, and that’s where the abduction took place. Now all the pieces fell into place, and I knew who the kidnapper was — the very Director Himself. How diabolical!

And how, you might ask, could I be so certain of the identity of Mr. Cuppy’s captor? Because, even after a quarter of a century leading our service, The Director has remained as evil and sinister as he was the time he heisted for ransom a prized Elvis painting from the office of one of the local fire chiefs — a caper for which to this day he has not been forgiven. And I knew what was in store for me — months of anguished waiting and, very possibly, an ugly ending for Mr. Cuppy.

Over the next few months the communications trickled in. Pictures of Mr. Cuppy in solitary under inhuman conditions, or being dragged behind a pickup truck. And then a sudden change of tactic; Mr. Cuppy lounging on the deck of a cruise ship; Mr. Cuppy gallivanting in foreign lands. I knew the game The Director was playing. After being broken by torture and deprivation, a vulnerable Mr. Cuppy was being lavished with excess, in the hope he would eventually forget about me and turn to the dark side. But I didn’t relent. Because I could not accuse The Director openly without more proof, I did all I could to persuade him of the cruelty of further incarceration through third parties and backdoor channels.

And then, one day, it was over, just as suddenly as it began. I returned from a run and there, sitting in the middle of my desk, was a large gray safe. Sticking out between the door and the body of the safe was a red and white plastic straw. A note taped to the safe told me how long Mr. Cuppy could survive in that safe with only the straw providing air. There were elaborate instructions on locating the combination to the safe, and warnings about what would happen to me and my family if I were to notify The Authorities.

The moment I had so long dreamed of finally arrived, and Mr. Cuppy was finally free of this bizarre captivity, apparently little worse for the wear. Most disturbing of all, the Director has continued to refuse to acknowledge his role in the kidnapping, and The Administration would not believe he had been responsible for this dastardly deed. But at least I had Mr. Cuppy back, and could finally rest easy. And I harbored fantasies of revenge, a dish best served cold, until, that is, the disappearance of Mr. Snake, the large rubber cobra that served as our mascot, from his customary spot on the dashboard of our squad. But that’s another story”¦