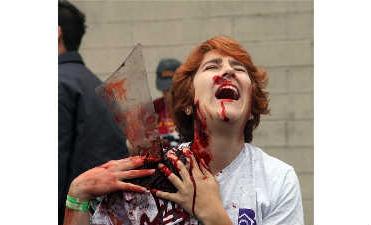 LOS ANGELES School children dove under tables in Los Angeles and sirens sounded in San Francisco on Thursday as California practiced how to survive a major earthquake.

“Drop, cover and hold on,” dozens of fourth-graders chanted just before the announcement of a simulated earthquake sent them scurrying under tables at the California Science Center at 10:15 a.m.

At the same moment nearly 7 million other people up and down the state were expected to do the same while emergency agencies and hospitals began response drills and mass casualty exercises.

Medical personnel triaged mock victims at the University of Southern California Health Sciences Campus and the Los Angeles County Fire Department practiced an evacuation of its headquarters and transfer of command to battalion chiefs using their vehicle radios as the primary means of radio dispatch.

A 70-person urban search and rescue unit began a daylong exercise at a county training site that can simulate collapsed structures.

People in San Francisco who were unaware the drill was beginning were startled when the city’s emergency sirens reverberated through downtown.

On the campus of the Academy of Art University, dozens of students in a computer animation class pushed back from their desks and scrambled beneath them.

“This is an earthquake drill. Everyone please drop, cover and hold,” the public address system announced.

The drill came just two days before the 20th anniversary of the magnitude-6.9 Loma Prieta quake that struck the San Francisco Bay region in 1989, killing 63 people.

Art student Lisa Allen, who grew up in upstate New York, said she was 4 at that time.

“I don’t really realize the threat of earthquakes,” Allen, 24, said just before the drill. “It’s definitely good to practice. I don’t really know what to do in an earthquake.”

That’s precisely the problem organizers of the ShakeOut said they were trying to address.

Many parts of California shake every day but it’s been more than 15 years since millions of Californians experienced something like the 1994 Northridge earthquake, which caused 72 deaths, injured thousands and caused $25 billion in damage to the Los Angeles region.

U.S. Geological Survey seismologist Lucy Jones, who crawled under a table along with a row of suited government officials at the science center, asked the fourth graders if they had ever felt a big quake.

“You haven’t,” she said. “Since you guys were born we haven’t had a big earthquake in Southern California.”

Jones noted in an interview that the problem goes well beyond children. Adults if they went to school in California may have practiced drop, cover and hold, but most have never done it, she said.

“What we are trying to do is get this in the adult consciousness in California,” she said.

Nine-year-old Victoria Vite, president of her class at Lenicia B. Weemes Elementary School, said she was certain the drill would help her.

“You have to prepare yourself because (otherwise) if that moment comes you’re not going to know what to do, and your house is going to be destroyed and you don’t have your things,” she said.