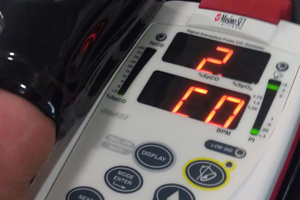 Should you trust your pulse CO-oximeter (SpCO) monitor? During the past few years, there have been conflicting messages about the accuracy of these devices. This Salt Lake City-based emergency department (ED) group attempted to answer that question by comparing Masimo RAD-57 SpCO monitor readings from a finger probe/sensor, to the carboxyhemoglobin (COHb) readings from a simultaneous blood draw.

Three lab technicians collected SpCO and COHb samples on 1,363 ED patients receiving blood draws from April to August 2008. This was a non-randomized sample of convenience study conducted at a single hospital.

The authors report that 84% of the study’s population was light-skinned and 45% were male. Fifty-two of the people studied were non-smokers. A variety of patient complaints existed, but the SpCO monitor flagged 122 patients, meeting a false positive criteria. A false positive was considered if the SpCO showed a value greater than a 3% point difference than the actual COHb level.

Only four patients were actually diagnosed with CO poisoning from the entire sample. In these cases, the SpCO oximetry monitor reading was 4—14% lower than COHb blood levels, which led the authors to conclude that the RAD-57 reports lower numbers than COHb. So far so good, right?

Well, three other patients with COHb greater than 10% received a 0% rating on the SpCO monitor. If the SpCO value of 0% had been used as a field triage tool, then these patients may have not received necessary evaluation and treatment at an ED.

So what should we conclude? First, the good: Previous studies have followed some flawed methodologies and didn’t adequately describe the details of their methodologies.  (See a review by Keith Wesley, MD, FACEP, and Marshall Washick, NREMT-P at www.jems.com/article/patient-care/rad-57-pulse-oximeter-performa.)

The authors of this Salt Lake City hospital study were careful to describe their methods and avoid some of the previous pitfalls of other researchers (e.g., timing of the blood draw). The authors did not report whether the sensors were shielded from excessive ambient light, if patient motion was reduced, or if the various sensor sizes were used, which are each important considerations with the Masimo CO-Oximeter. They did report that the device performed within the margin of the manufacturer’s specifications.

And, from a purely statistical and research perspective, the sample of patients with detectible CO levels is simply too small to make any meaningful conclusions.

The concern a study like this presents is that, if we are to use this device for prehospital triage of potential CO exposures, then it would be preferable that the device would be sensitive enough to detect any potential exposure, and perhaps err on the side of over-triaging. Sending someone home based on a RAD-57’s “0” or low reading if that patient was actually sick, could be disastrous. Regardless of whether this was an operator or machine error, I worry about the patients with 0% readings who had elevated blood COHb readings.

I would feel pretty terrible sending someone home only to find out they had a treatable condition that caused them harm because of my lack of action. The controversy will continue, but this is an important reason never to just base your field triage decisions on any machines. Instead, providers should use these devices in conjunction with other assessment processes and treatment tools, particularly when patients have potentially been exposed to CO or have CO symptoms.

Bottom Line
What we know: The RAD-57 is being used by many systems across the country. The machine has shown great promise and helped identify many CO exposures. Previous research has raised concerns regarding its accuracy.

What these studies add: This study provides very weak evidence of a possible 9% false positive rate and confusion about the trustworthiness of a low RAD-57 number based on only five patients. More rigorous study is needed before any conclusions can be made. Providers are encouraged to talk to their medical directors and be sure to receive proper orientation and training before using any medical device.

This prehospital cohort study compared the use of normal saline bolus with an odansetron orally dissolving tablet (ODT) for the treatment of nausea. Researchers enrolled 274 consecutive patients to receive normal ODT during a four-month period. As you would have predicted, the ODT group showed significantly decreased nausea symptoms. No amount of normal saline was able to show a significant effect. No adverse events were reported, and the two groups of patients were similar in ages and severity of nausea. This study shows a clear win for odansetron and for ALS care making a difference.

Kudos to this group for doing prehospital research. Many of us have seen odansetron work its magic, but having some science to back up its safe and efficacious use makes for a more scientific and professional care standard.

This cross-sectional, population-based study should pique the curiosity of community paramedic advocates. They report rapidly rising in-hospital admission costs and more prevalence of chronic obstructive pulmonary disorder (COPD) in women. This survey of 416 respondents shows a 37% increase in the cost of caring for COPD during the past 20 years. The authors conclude that COPD has become a costly disease, which is now more prevalent in women than men. The authors recommend shifting costs to fund prevention and conducting follow-up efforts to avoid readmission of patients back into the hospital.

Perhaps the community paramedic model will play a role in improving this part of the healthcare system.

Glossary
Sample of convenience: A sample of convenience is a grouping of research subjects or values collected because they were easily available. They aren’t randomized or otherwise scientifically selected, and generally they’re not representative of or able to be generalized to an entire population.