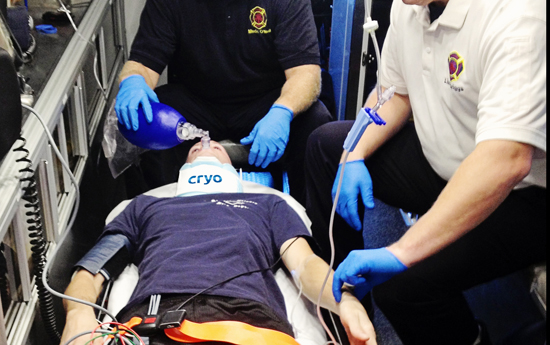 It has been three years since the publication of the 2010 American Heart Association’s recommendation on therapeutic hypothermia, and studies continue to show that “therapeutic hypothermia should be initiated as soon as possible in patients facing possible ischemic injury as time moderates hypothermia’s effectiveness as a neuroprotectant.”1 Although prehospital cooling of cardiac arrest patients has been adopted by many first responders, there remains a significant number of organizations yet to utilize the therapy.

The reasons for delayed adoption are well understood. A few believe there isn’t enough evidence to support implementation of early cooling in the prehospital setting. Existing methods available to induce hypothermia by first responders–infusing chilled saline and/or the application of ice packs–have been challenged on their consistency, effectiveness, side effects and potential for uncontrolled rewarming. Additionally, not all personnel are cleared to infuse chilled saline as it’s usually an ALS skill.

The University Hospitals EMS Training & Disaster Preparedness Institute in northeast Ohio sought a solution to allow therapeutic hypothermia on all vehicles. A product was selected that all personnel could administer and that would ensure the continuity of cooling from the scene through the ED and all the way to the ICU. The institute recently completed a study on the chosen product–the Excel Cryo Cooling System (Cryothermic Systems Inc., Cleveland, Ohio)–to validate its effectiveness.

Time to Cool
Some recent studies show an association between time to cooling and mortality (a one-hour delay in time to cooling increases the risk of death by 20%) and that therapeutic hypothermia, when combined with return of spontaneous circulation within 25 minutes of cardiac arrest, yields positive outcomes.2,3 Further, it was found that for every five-minute delay in initiating hypothermia, there was a 6% greater chance of the patient having a poor outcome.4

Cost to Cool
Operationally, the cost of equipping all vehicles with refrigeration and supplies necessary to infuse chilled saline has been determined to be prohibitive for many organizations. Those that have done so are now facing increased costs of ongoing maintenance of the refrigeration units, vehicle electrical modules, fuel and labor. Many municipalities report that due to high expense, only a limited number of vehicles are equipped with refrigeration and/or ALS personnel. Can the population be adequately served with a limited number of vehicles and personnel capable of responding in time to administer the therapy? Further, additional studies may show benefit from intra-arrest cooling, which further complicates utilization of chilled saline.

IV infusion of chilled saline, while shown to be effective in many cases, has numerous side effects, including hemodilution, potential fluid overload in patients with heart failure, coagulopathy, increased infection rates, reduced drug effectiveness, and excessive patient hypothermia that can result in shivering and potential re-arrest. Cooling effectiveness has also been shown to vary by patient body mass and is severely limited by the maximum IV solution that can be infused, which greatly limits the amount of time cooling can be maintained.

This is significant in light of arrival and on-scene time, transport time, ED triage and stabilization, plus the potential imaging and cath lab diversions all adding to the time to arrive at, and achieve, hypothermia target temperature in the ICU. 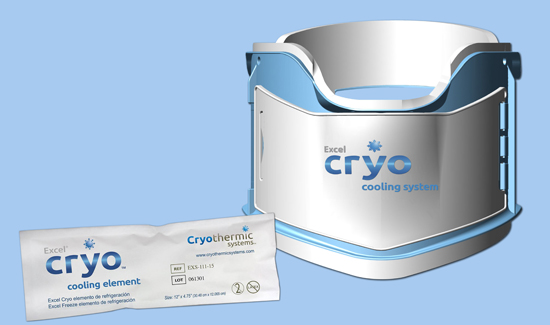 It was our goal to find a way to equip all vehicles with cooling capabilities and all personnel with the ability to administer hypothermia quickly, consistently and effectively. The Excel Cryo Cooling System is the only product currently available that meets the set objectives. It consists of a unique cervical immobilization collar and cooling element. The collar is fitted around the patient’s neck and the cooling element is applied to the front of the neck over the carotid triangle and secured in place by the collar. Once activated, the cooling element achieves a temperature of -3.0°C to -5.0°C within seconds, cooling the blood traveling through the carotid triangles.

The Excel Cryo was designed to provide consistent cooling regardless of patient size or weight. By cooling the brain through the extraction of heat from carotid blood flow, the system provides long-term uninterrupted cooling regardless of time to reach the cooling systems in the ICU. Although some EDs have access to systemic cooling systems, they require consistent power and are often not used because the transit times will interrupt the cooling process. Use of the Excel Cryo, which doesn’t require a power source, allows for cooling maintenance and avoids the undesired systemic side effects seen with use of the other cooling methods.

The Excel Cryo Cooling System was designed for use by EMS and other first responders to safely, effectively and non-invasively cool patients. The system was adopted as part of University Hospitals EMS resuscitation protocol and implemented in 84 municipalities with more than 200 vehicles in 2012.

Additional Validation
Targeting improvement in patient care, specifically for incidences of out-of-hospital cardiac arrest, University Hospitals has implemented protocols and training for high-performance CPR, airway management and now therapeutic hypothermia. The University Hospitals EMS Training and Disaster Preparedness Institute tested the Excel Cryo Cooling System on 15 healthy volunteer subjects to provide ourselves and our emergency medical community colleagues with additional data validation of the effectiveness of the product. The results show mild therapeutic hypothermia can be attained quickly and safely. Of the 15 patients included in the study, all reached a temperature drop into the mild hypothermia range. The average temperature drop was 1.73°C and average time to mild hypothermia was 31.7 minutes. Two subjects reached a temperature of 3.0°C and 3.6°C, respectively.

We concluded that the Excel Cryo Cooling System is a safe and effective method for cerebral cooling and reaching mild hypothermia, which is necessary for neuro-protection in cardiac arrest patients.