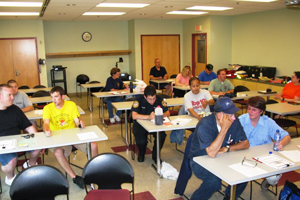 In June, the state of Massachusetts revoked 211 EMT licenses after a massive investigation by the Massachusetts Department of Public Health found that they had falsified their refresher training records. Most of the revocations were temporary, ranging from 45 days to nine months. The involved EMTs worked at 10 different private and 14 municipal services in a number of communities across the state, including Boston, Cambridge, Haverhill and Salem. Several were police officers. A recently retired Somerville deputy fire chief, Stephen Keenan, was among those found with fake credentials; he received only a 45-day suspension.

Two instructors–Mark Culleton and Leo Nault–issued the false training certificates. The state permanently revoked their certifications. The state found that the two instructors handed out the certificates without actually providing the training; in some cases, they received money in return. Nault had been receiving workers’ compensation payments for more than a year while still running an EMS training business.

The falsification of EMT credentials is not a new problem. Between 2006 and 2008, Denver General Hospital found problems with paramedic certifications. Denver Health paramedic Robert Loop noticed a paramedic at the scene of a car crash who was wearing their uniform, but whom he didn’t recognize. Then, an investigation found that Brett Andrews was a serial paramedic impersonator. Two years later, state officials found that Loop had forged a document allowing him to continue working as a paramedic. The state alleged that he put his name on another paramedic’s certificate before turning it in to hospital administration. As part of a regular verification of credentials, Denver Health contacted the state agency that issues EMT certification and found that Loop wasn’t listed on the state’s data bank.

Also in Colorado, paramedic Tod Teel was found to have been working for AMR for over a year without proper certification.

The Fallout
While Massachusetts took permanent action against the instructors who issued the false certificates, the actions against the EMTs who accepted them are relatively a “slap on the hand.” These EMTs acknowledged that they took the courses knowing they didn’t attend the classes or successfully complete the training. Some of them remained on the job while the investigation was pursued; others who were found not to have completed the training were directed to do so immediately. Many of them were back on the job in a matter of a couple of weeks.

Whether any criminal charges will be pursued by the state of Massachusetts remains to be seen. This past year, the Public Corruption Unit of the Massachusetts Attorney General’s office investigated former Ipswich and Middleton Fire Chief Henry Michalski, Jr. for falsifying records, ultimately charging him with perjury and attempted obstruction of justice for falsifying statements about training classes and attendance rosters.

Ongoing investigations at the involved services will also determine whether the impersonators received shift differentials and other pay increases they should not have been entitled to.

Apparently, many EMTs cannot be trusted to have taken the training they are willing to verify they have taken. A budding “cottage industry” in production of falsified training certificates needs to be stopped swiftly and with serious punishment, but both the “supply” and “demand” have to be addressed. Not only was someone selling false training certificates, but many were apparently buying.

What are the penalties for a person who is found to have represented themselves as an EMT without completing all of the required training and recertification? And what should they be? The New Jersey Administrative Code allows the state to impose a fine of up to $500 a day for repeated instances of impersonation of an EMT. A single instance will be punished by a fine of $200 per day. However, other states, such as New Mexico, have laws making impersonation of an EMT a crime, although generally a misdemeanor. Criminal statutes prohibiting perjury may also apply to this situation.

Falsification of training is a serious breach of EMS ethics and should not be tolerated by EMS services or state certification/licensing agencies. EMS services must perform regular verification of EMT credentials. Many states now post EMT certification or licensure online, making it easier to verify. Some services have taken their recertification training “in house” so that it is easier to know who attended what training, when and where.

The recent unmasking of hundreds of falsified EMT credentials is a “black eye” for all of EMS and undermines the public trust in our services. Patients experiencing emergencies should be able to rely on the uniform patch as representing current training, certification and/or licensure at the level stated. The fact that the penalties for falsification of training are so light points to the need for stiffer laws to punish those who think that they can circumvent the training requirements by purchasing or falsifying their training. After all, do we want EMTs who don’t want to be bothered taking the required training? And, if they’re willing to lie about their training, what else will they lie about?