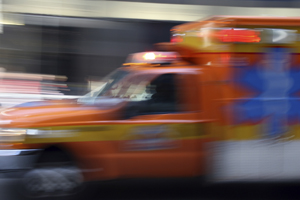 When I was much younger, there would commonly be about two or three airlines crashes a year in the U.S. that resulted in a tremendous loss of life. Now that I’m older, I’m hard pressed to tell you when the last major airliner crashed in the U.S. (knock on wood), even though there are thousands of take-offs and landings each day. No pun intended, but this is no accident.

Since the 1950s, the aviation industry has made tremendous strides to reduce accidents. The goal is to put proper measures in place to prevent known ways of crashing planes. This can be a somewhat limited subject, however, because as risk management guru Gordon Graham says, they haven’t figured out any new ways to crash a plane. Still, the only factor the flight business has figured out it cannot fully control is human error.

Can the EMS profession learn from the aviation industry when it comes to preventing ambulance accidents? If you work in an EMS system where ambulance crashes occasionally happen, you know they can be serious or minor. They can happen at intersections, during backing, when mirrors hit other mirrors while driving down the street or hitting some stationary object.

Driving ambulances and other emergency vehicles is inherently dangerous. A study published in September 2011 by the Fire Protection Research Foundation found 590 fatalities and 28,969 injuries related to ambulance crashes happened between 1990 and 2009.1 But there were also many more ambulance crashes that didn’t involve fatalities or injuries. It is also important to note that not all the fatalities or injuries came from those riding in the ambulance, but could have been from the other vehicle the ambulance collided with.

My experience tells me the majority of serious ambulance collisions typically involve driving the ambulance emergently while trying to go through an intersection against the red light. Typically, a human is part (or all) of the reason why the crashes happened.

Maybe the EMS profession can consider looking at the Human Factor Analysis Classification System (HFACS), a model used by the aviation industry that looks at human factors of why crashes happen. The system also provides an investigative tool to fact-find and then provides training to prevent the collision from happening again. The fire service has already started using the HFACS system when looking at firefighter injuries and deaths, and the National Firefighter Near Miss Reporting System is modeled after the aviation reporting system and factors in components of the HFACS.

Recently, other strides have been made in regard to safety, including the Standard for Automotive Ambulances–commonly referred to as National Fire Protection Act (NFPA) 1917. This is the first time ambulance designs have been looked at in an attempt to find ways to increase operating and riding safety. Because it is relatively new, NFPA 1917 has not been adopted at a state level, but many at the national level are working on the finer points of the Standard with the goal of getting the states to adopt it in the future. The federal KKK specification, which was due to be retired this year, has been extended for two more years. This federal specification is used by many states and establishes rules for how ambulances should be designed in order to comply for licensure. Unfortunately, the KKK specification is primarily a purchasing specification and has little to do with safety areas.

Preventing ambulance crashes is a major risk management issue. Besides death and injuries, lawsuits should also be considered. If your personnel performed some terrible driving maneuver, your department’s name will be blasted in the media. The three principles of risk management are 1) prevention of injury and death, 2) monetary loss and 3) prevention of irreparable name damage. Preventing ambulance collisions touches all three.

The safety of the professionals who work on our ambulances and the citizens who ride in them are paramount. As a profession, we need to really start focusing on the safety of our personnel and doing more to prevent ambulance crashes.