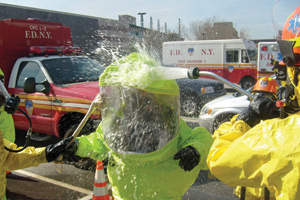 Often, we have little more than a tourniquet, alcohol prep and a patient’s willing arm. We’ve jabbed them–and performed a procedure similar to exploratory surgery–trying to fit a tiny Teflon catheter into a vein. This procedure is more challenging while bouncing around in the back of a moving ambulance.

Throughout our training and career, we’ve often heard that “paramedics are great at starting IVs while driving down the road.” We’ve all experienced difficulty establishing a peripheral IV on a severely hypotensive patient or even someone in cardiac arrest. In the ’80s and ’90s, we traditionally found ourselves tentatively using the manual intraosseous (IO) needle for pediatric patients who required vascular access for the emergent administration of medication.
IO devices, albeit manual, have been around for years in emergency medicine. In 1922, Cecil Drinker proposed the IO as a suitable route for blood administration. In 1942, E.M. Papper, MD, compared the circulation times of fluids administered intraosseously versus peripheral vasculature, and he drew the conclusion that both routes were the same.

Up until the turn of the century, many in emergency medicine were taught to use the IO for vascular access in pediatric patients who required critical medical care when a peripheral IV couldn’t be established in 90 seconds or less.

For nearly 60 years, adult IO access was discouraged. Then, we began to see air medical providers using such “cool tools” as the BIG (Bone Injection Gun) or the PYNG FAST1 for adult IO access. In 1984, James P. Orlowski, MD, wrote an article supporting the use of IO. The article discussed the need for IO vascular access in all patients, yet many in the medical community shunned this notion.

The Theory
Many of us teach skills the same way we were taught. But how much thought goes into the psychomotor aspect of teaching skills? Some may remember Task Analysis Theory developed by R.M. Gagne. He discussed three questions used in creating the task analysis:

Additionally, he indicated that the instructor should strive to include positive reinforcement when a skill is first learned. It’s important to reinforce good technique and redirect bad technique. However, you should also incorporate critical thinking and timeliness.

Many use the “full speed ahead” or “play like you practice” approach with skills. This is a component of the classic skill formula:
Skill = Speed + Accuracy + Form + Adaptability

Ideally, this technique focuses on having the learner perform at a higher level in the instructional environment; however, it’s obviously difficult to mimic the multiple extrinsic distracters that occur during real-life events. It’s important to note that with this theory, failure can occur during initial instruction if attention isn’t directed toward the accuracy of the skill. This will result in the skill being performed improperly when the need for speed and adaptability are stressed.

Now, let’s examine the component of accountability. As instructors, we occasionally observe multiple students during a practice session. How should we provide each student with the most effective and best feedback in a timely manner?

Consider using the “military approach” to skills instruction: See one, teach one, do one. First, present the skill in its raw, basic form, addressing each step as it’s performed. Next, combine the skill, and perform it in real time. Once this has been presented, separate students into groups of three. Provide each with the opportunity to perform the skill, evaluate the skill using the criteria, and teach the skill to other students in the group.

Clear Performance Model: A full and accurate demonstration of the skill is key to this component. Present the skill with the resources and materials that will be available to students during performance of the skill. Position students so that they can see all aspects of the demonstration, and encourage them to ask questions. The instructor should ask decision-style questions of the learners (e.g., “What should happen next?”).

Openness to Learning: The environment for learning the new skill should be non-threatening. Both instructors and students should be relaxed when presenting and practicing it, but instructors need to be sensitive to students’ natural anxiety when practicing a skill. Also, give students permission to experiment and make mistakes while practicing in the non-clinical setting. This will allow them to troubleshoot their mistakes and seek appropriate solutions, in addition to enhancing their critical thinking ability.

Assess Performance: Allow the students to evaluate their own strengths and weakness while performing the skill. A checklist can clearly establish the expectations and outcomes for the skill. Often, students will feel less threatened when the feedback comes from their peer instead of an instructor. Ensure that the feedback provided is specific and offers suggestions for improvement while also providing positive reinforcement.

Communicate with Learners: Instructors should ask questions to help learners resolve their concerns and ensure that there’s an understanding of the problem before assisting the student in solving it. Help the students in finding their own solutions by focusing on the problem instead of blaming others. Encourage creative problem-solving by allowing students to find better ways of doing things, as well as allowing students to provide feedback on the training session and suggest improvements.

Help and Follow-Up: As with learning any new process or procedure, students should be encouraged to continually practice and apply the skill after the initial learning. Instructors should serve as resources for clarification, offering additional and supervised practice and periodic performance feedback. Now that we’ve discussed this learning model, it’s easy to see how it could apply to the techniques of IO vascular access.

The Practice
Montgomery County (Texas) Hospital District EMS (MCHD) has always prided itself in being an industry leader in adopting new technology. In 2003, MCHD began exploring IO access in adults. Our medical director had previously approved the use of traditional manual IO needles for adult patients in cardiac arrest, but many of us soon discovered that placing the manual IO needle in adults often resulted in bending the needle or blunting its tip. We were all using traditional landmarks we learned in PALS on adult patients, and we weren’t very successful. As we explored various solutions, we were introduced to the EZ-IO by Vidacare, Inc.

In 2004, MCHD worked with Vidacare’s director of education, Scotty Bolleter, to create a clear, concise and effective training presentation. We trained our field providers over a one-week period and then deployed the device and updated protocols. Because we were engaged in a company-sponsored beta testing of the device, every IO usage was documented on a separate evaluation form, detailing several parameters, including ease of insertion, time of insertion, ease of identifying landmarks and the amount of fluid infused. The protocols allowed for personnel to use the IO first line for vascular access in cases of cardiac arrest and post-resuscitation management. All other types of patients required online medical control approval.

We soon discovered three types of users: those who had rapid acquisition and application, those who were slow to use the product and those who chose not to use the device. As we proceeded with the evaluation and spoke to providers about its use, it became apparent that the individuals who were slow or chose not to use the product had several concerns. One concern was the perceived difficulty in bolusing 50 mL or more through the needle set. Also, a peripheral IV was easier to obtain and use in cardiac arrest. Finally, the device took too much time to place compared to an IV.

To address the concerns, we prepared a simulation using both a catheter and an EZ-IO needle set that had a 10cc syringe on one end and a 50cc syringe on the other. We presented this to the providers who had the perceived difficulty in bolusing 50cc, and they soon realized the bolus was no different in the IV catheters or the EZ-IO. We addressed concerns regarding the use of the device during cardiac arrest by allowing providers to see the speed with which an IO could be placed in a non-collapsible vein (the bone) versus a peripheral IV site in the arm when CPR is being performed and peripheral veins aren’t easily accessible.

Additionally, while monitoring the beta testing progress, we were able to retrain individuals who had difficulty placing the device and had no-flow events. These incidents were often attributed to improper placement, difficulty in verifying landmarks or deterioration in the skill after initial training.

In retrospect, we used the COACH model. Instructors provided protocols, which detailed clear performance and expectations. Instructors allowed for openness in the learning process. We assessed their performance during the initial training, during beta testing and repeated usage. We were able to address the staff’s concerns with the EZ-IO and provide an opportunity for corrective training. And we encouraged staff to seek out their supervisors or clinical staff to address their concerns.

So where are we today? We’ve added humeral head access to our procedure, and we recently deployed the pediatric EZ-IO needle set. We’re in the process of ensuring that all stations have training needle sets, adult and pediatric tibia and adult humeral sawbones.

We take pride in the fact that we were the first ground-based EMS agency in the world to deploy the EZ-IO and had “patient zero” with the product. MCHD strives to provide the best tools and resources so our staff can make a difference in our patients’ lives. We promote an open training environment and constantly encourage staff to seek out supervisors, clinical educators and the medical director to assist them in overcoming clinical challenges. JEMS

This article originally appeared in June 2010 JEMS as “All Access Pass: Mastering the use of IO devices.”