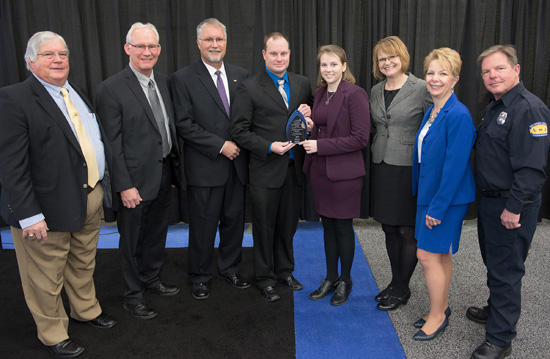 In the late 1990’s, local officials in Clackamas County Oregon were stunned when over a five-year period 13 people drowned, including many children, in a local river park. AMR worked with the local community and lifeguards with a goal to end deaths at the park through a program of prevention and education.

“The River Safety Program has been a labor of love for AMR’s Justine Kilsby, Scott Stafford and Lucie Drum,” said Randy Lauer, who heads operations in the northwest for AMR. “Their effort, and the effort of their colleagues in the program, have made a significant difference. We’re very proud of their unselfish service to their community.”

In 2002, JEMS and EPIC Medics introduced the Nicholas Rosecrans award, created by paramedics Paul Maxwell and Josh Krimston in the memory of a little boy who died in a preventable drowning. It is supported by the National Highway Traffic Administrations’ Federal Office of EMS, the Centers for Disease Control and Prevention, Laerdal Medical, and the RedFlash Group.

“While we celebrate many different kinds of injury prevention programs, this year’s winner particularly resonates,” said Maxwell, who was one of the paramedics who cared for Nicholas and later met with Lynn, the boy’s mother. (Nicholas had wandered away from a daycare facility and fell into a backyard pool nearby. Maxwell and his colleagues at EPIC Medics made it their mission to eliminate preventable drowning in their community, using awareness but also advocating for new laws requiring backyard pools to be fenced.)

“The River Safety Program has prevented hundreds of rescues from ever having to take place, and saved many lives, many of whom are children,” said Maxwell. “In fact, based on the trends from the previous 15 years, it is estimated that 57 lives have been saved since the inception of the program. They are to be commended for their dedication.”

The AMR River Safety Team works with the local Safe Kids organization, local nonprofits and hospitals to provide community education on water safety. On site, AMR performs several thousand outreach encounters to warn of hazards and to get to them before their lives are at risk in the swift moving water that can take even the most seasoned swimmer by surprise.

About EPIC Medics
EPIC Medics represents first responders of all stripes who seek to work collaboratively to prevent injuries. Based in San Diego, Calif., the organization was co-founded by paramedics Paul Maxwell and Josh Krimston. It has sponsored the Nicholas Rosecrans award, promoting injury prevention as a part of the EMS mission, since 2002.