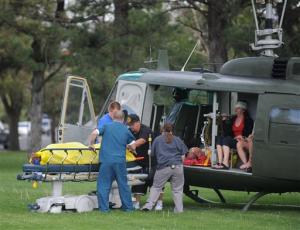 The plane, flown by an 80-year-old pilot, spiraled suddenly out of control and appeared to disintegrate upon impact. Bloodied bodies were spread across the area as people tended to the victims and ambulances rushed to the scene.

Maureen Higgins of Alabama, who has been coming to the show for 16 years, said the pilot was on his third lap when he lost control.

She was sitting about 30 yards away from the crash and watched in horror as the man in front of her started bleeding after a piece of debris hit him in the head.

“I saw body parts and gore like you wouldn’t believe it. I’m talking an arm, a leg,” Higgins said “The alive people were missing body parts. I am not kidding you. It was gore. Unbelievable gore.”

Among the dead was pilot Jimmy Leeward, 80, of Ocala, Florida, who flew the P-51 Mustang named the “Galloping Ghost,” according to Mike Houghton, president and CEO of Reno Air Races.

Renown Medical Center spokeswoman Kathy Carter confirmed that two others died, but did not provide their identities.

Stephanie Kruse, a spokeswoman for the Regional Emergency Medical Service Authority, told The Associated Press that emergency crews took a total of 56 injury victims to three hospitals. She said they also observed a number of people being transported by private vehicle, which they are not including in their count.

Kruse said of the total 56, at the time of transport, 15 were considered in critical condition, 13 were serious condition with potentially life-threatening injuries and 28 were non-serious or non-life threatening.

“This is a very large incident, probably one of the largest this community has seen in decades,” Kruse told The Associated Press. “The community is pulling together to try to deal with the scope of it. The hospitals have certainly geared up and staffed up to deal with it.”

The P-51 Mustang crashed into a box-seat area in front of the grandstand at about 4:30 p.m., race spokesman Mike Draper said. Houghton said Leeward appeared to have “lost control of the aircraft,” though details on why that happened weren’t immediately known.

KRNV-TV weatherman Jeff Martinez, who was just outside the air race grounds at the time, said the plane veered to the right and then “it just augered straight into the ground.”

“You saw pieces and parts going everywhere,” he said. “Everyone is in disbelief.”

Tanya Breining, off Hayward, California, told KTVU-TV in San Francisco: “It was absolute carnage … It looked like more than a bomb exploded.”

Another witness, Ronald Sargis, said he was sitting in the box seat area near the finish line.

“We could see the plane coming around the far turn – it was in trouble,” Sargis told KCRA-TV in Sacramento. “About six or seven boxes down from us, it impacted into the front row.”

He said the pilot appeared to do all he could to avoid crashing into the crowd. Response teams immediately went to work, Sargis said. After the crash Sargis went up a few rows into the grandstand to view the downed plane.

“It appeared to be just pulverized,” he said.

Leeward, the owner of the Leeward Air Ranch Racing Team, was a well-known racing pilot. His website says he has flown more than 120 races and served as a stunt pilot for numerous movies, including “Amelia” and “Cloud Dancer.”

In an interview with the Ocala (Florida) Star-Banner last year, he described how he has flown 250 types of planes and has a particular fondness for the P-51, which came into the war relatively late and was used as a long-range bomber escort over Europe. Among the famous pilots of the hot new fighter was WWII double ace Chuck Yeager.

Houghton described Leeward as “a good friend. Everybody knows him. It’s a tight knit family. He’s been here for a long, long time,” Houghton said.

The National Championship Air Races draws thousands of people every year in September to watch various military and civilian planes race. They also have attracted scrutiny in the past over safety concerns, including four pilots killed in 2007 and 2008. It was such a concern that local school officials once considered whether they should not allow student field trips at the event.

The competition is like a car race in the sky, with planes flying wingtip-to-wingtip as low as 50 feet (15.2 meters) off the sagebrush at speeds sometimes surpassing 500 mph (800 mph). Pilots follow an oval path around pylons, with distances and speeds depending on the class of aircraft.

The FAA and air race organizers spend months preparing for air races as they develop a plan involving pilot qualification, training and testing along with a layout for the course. The FAA inspects pilots’ practice runs and brief pilots on the route maneuvers and emergency procedures.

Sen. Harry Reid, D-Nevada, issued a statement saying he was “deeply saddened” about the crash.

“My thoughts are with the families of those who have lost their lives and with those who were wounded in this horrific tragedy,” he said. “I am so grateful to our first responders for their swift action and will continue to monitor this situation as it develops.”