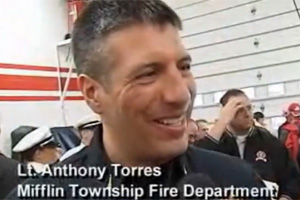 As he had hundreds of times, Mifflin Township Fire Lt. Anthony Torres took stock of the bloodied patient lying in the road after a car-motorcycle collision.

The man, he concluded, would live. But that mangled left foot, a pulp of crushed bone and shredded tendons … well, walking again might be a challenge.

But, this time was different: Torres was patient rather than paramedic.

As the wail of the Columbus firetruck and medical squad grew closer, Torres found comfort in the noise. Fellow firefighters were coming to help. “Those sirens … you knew it was going to be OK,” he said.

Slightly more than 11 months after the wreck, Torres returned to duty yesterday with a prosthetic leg, a replacement for the limb he lost below the knee in the Polaris Parkway crash.

He’s back where he belongs, on the firetruck with the Station No. 132 “Blacksheep.”

The 38-year-old Torres is believed to be the first amputee in Ohio to serve as a front-line firefighter. “For me to be able to do it again, I feel very, very blessed, and I’m very happy,” he said.

More than 100 firefighters, family members and friends offered Torres hugs and handshakes, plus a standing ovation, at a welcome-back ceremony yesterday at a fire station in Gahanna.

His pulverized foot could have been saved perhaps, but it would have been unlikely that Torres could have continued his career. Instead, he traded amputation and months of rehabilitation for just a shot at returning to the only job he ever wanted.

“It actually was a pretty easy decision,” Torres said. “This is more than a profession; it’s a way of life.”

Five or 10 years ago, Torres would have been doomed to a fire-department desk job. But medical and prosthetic advances, and perhaps a change in attitude toward the “disabled,” offered a chance for someone willing to put in the work.

Dr. Scott Van Aman, Torres’ orthopedic surgeon, questioned at first if Torres could make the comeback. “But, once I met Lt. Torres … I felt it was pretty much a sure thing in short order.”

Mifflin Township Fire Chief Tim Taylor said Torres’ return was not a pity appointment. He passed the physical tests required of two-legged firefighters who must scale ladders and carry heavy hoses — and victims and each other.

Torres, who is charge of the shift at his station, believes in service before self, friends said. That first night in Riverside Methodist Hospital, for example, he was more worried about who would take his place in training new firefighters.

Columbus Fire Capt. Greg Lash, a friend of Torres’, also never doubted his buddy’s return. “Once he knew it was possible … you knew this goal was going to be achieved, because it’s Anthony.”

Torres deflected praise, saying a support system of his 79 fellow firefighters and family saw him through “the most difficult thing in my life.”

The last year has been a “life-changer,” Torres said. He lost his lower leg, got married to Stephanie and bought a house. The couple is expecting a baby in June, a daughter he wants to make proud.

Torres was all smiles as he greeted firefighters and friends, his slightly awkward gait the only hint he is less than whole in body. He’s whole where it counts most — in heart and spirit.