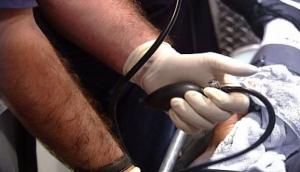 WASHINGTON (MyFoxDC) – Paramedics, the most elite medical responders in the city’s fire department, are leaving the District’s Fire and EMS agency at such high rate due to overwork and stress that the department is now facing a critical shortage, multiple department sources told FOX 5 News.

Call volume in the city has been rising over the past three years as a result of increased population, but the department’s emergency medical system, especially its staffing of paramedic units, has fallen short, FOX 5 has learned.

For example, FOX 5 has learned that on many days, the department is unable to fill all its 14 paramedic-staffed ambulances that are supposed to be in service around the clock every day to respond to the most critical life-threatening calls, because it is short as many as 100 paramedics to fill the slots.

Paramedics have more than 1,600 hours of training in life-saving emergency procedures, compared to about 300 hours of training for emergency medical technicians or EMTs, who make up the bulk of the department’s EMS first responders. Unlike EMTs, paramedics can use the most sophisticated defibrillators for patients in cardiac arrest, start IVs, push life-saving drugs like insulin and insert breathing tubes to help patients in respiratory distress.

But in D.C., there aren’t enough of them. Several years ago, the city shelled out $7,000 in bonuses to recruit paramedics, but many of them have already left for other jurisdictions like Montgomery County, Md. and Annapolis, according to the firefighters union. Moreover, there hasn’t been a paramedic class or hiring effort since to replace those that have left, the union says.

To offset the shortage, the department has been forced to pull firefighters who are cross-trained as paramedics off engine companies to backfill the ambulance slots. Currently about two dozen fire engines, which cost more than $500,000 each, are also now serving as expensive EMS shuttles, delivering paramedics to emergency calls to get a top-level medical provider on-scene quickly on the most urgent runs when paramedic-staffed ambulances aren’t available.

But taking engine companies out of service to run medical calls is risky, says Ed Smith, the union chief.

“Hopefully there are no fires during the same time,” he said.

Even more serious, FOX 5 has learned the department has been forced to hold over some paramedics who have already worked a 24-hour shift for as many as 12 more hours, just to keep some units on the street, leading to fatigue and low morale.

“Somebody’s going to die or get hurt from this and I don’t want a part of it anymore,” one veteran D.C. firefighter/paramedic told FOX 5.

The D.C. first responder only agreed to talk if we hid their identity, for fear of retaliation.

The city’s emergency medical system, the paramedic said “is going to crash. Everybody knows it. We all talk about it. It’s going to crash and there’s no predicting who’s going be in its way.”

The D.C. firefighter/paramedic also told FOX 5 that because of the shortage, they are often bounced around the city from station to station every shift, depending on need. That makes it hard to learn a particular area of the city, they said, which can lead to longer response times as paramedics struggle to find an out-of-the-way address or apartment.

In addition, paramedics aren’t allowed to refuse department orders to continue work, even if they’re exhausted from working 24 hours straight.

“You cannot go home, you will be put on charges, which are disciplinary action, even if you don’t feel up to it,” the D.C. paramedic told FOX 5.

D.C. Fire and EMS Chief Kenneth Ellerbe told FOX 5 News that the city doesn’t have a paramedic shortage, saying there are more than 240 paramedic-certified employees in the department, even though not all on are on the street or available to care for patients.

“I know that we are able to respond to the community every time we have a call,” Ellerbe said in an interview.

He said that holdovers of paramedics do occur, however.

Still, in a follow-up interview at the chief’s request the day our story was to air, Chief Ellerbe declined to answer questions on the safety of the system, referring questions about whether a 36-hour shift for a paramedic puts patients at risk to his medical director, David Miramontes.

“I can tell you we provide really good patient care,” Miramontes told FOX 5.

To reduce the fatigue on paramedics and EMTs, the city has come up with a new deployment plan for its ambulances called “power shifts” where more units will be on duty during the daytime, when the call volume is highest, and be reduced at night when there are far fewer calls.

“That will allow us to put from 25 to 45 units on the street, particularly during our heaviest call volume hours,” Ellerbe said.

Still, union chief Ed Smith has his concerns, saying the plan actually leaves the District without a dedicated paramedic-staffed ambulance from 1 a.m. to 7 a.m. The power shift was to go into effect this month, but FOX 5 has learned it has been delayed, at least until next year.

Marie Bates, who lives in Southeast Washington, is one District resident who has witnessed the struggles of the DC EMS system up close and personal. In August, she called 911 from her home on Good Hope Road, SE for chest pains, a top priority call for the D.C. emergency medical system. But since there were no close-by units available, a paramedic-staffed fire engine from Station 29 on MacArthur Boulevard in Upper Northwest had to answer the call, more than seven miles away. The response time was nearly 20 minutes, more than twice what it should have been by department protocol.

“They told me that first they were coming,” she told FOX 5 News. “Then they said they were uptown, they couldn’t get through.”

She worries though about other District residents who may not be so lucky when they call 911 and have to wait for a paramedic to arrive.

“People could be on their deathbed,” she said.