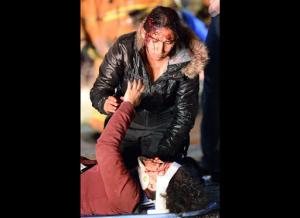 YUCAIPA, Calif. (AP) – At least eight people were killed and 38 injured when a tourist bus careened out of control down a California mountain road, struck a car, flipped over and hit a pickup truck, authorities said.

In the chaotic scene, authorities had a difficult time determining how many people were injured or killed. Lopez said at least eight and perhaps 10 were dead, and 38 were sent to hospitals.

The bus driver survived and told investigators the bus suffered brake problems as it headed down the mountain, Lopez said. It rear-ended a sedan and flipped, then struck a pickup truck pulling a trailer.

Lettering on the bus indicated it was operated by Scapadas Magicas LLC, a company based in National City, California. Federal transportation records show that the company is licensed to carry passengers for interstate travel and that it had no crashes in the past two years.

A call to the company was not immediately returned.

Jordi Garcia, a manager for InterBus Tours, said his company ran Sunday’s trip. He told the U-T San Diego newspaper that 38 people departed Tijuana at 5 a.m. for a day of skiing at Big Bear.

It was not possible to immediately reconcile his number of people with other accounts.

Patients were taken to several area hospitals with injuries ranging from minor to life-threatening. Arrowhead Regional Medical Center said it had treated six people, including two women who were discharged early Monday. The hospital said two other women were in critical condition while two other patients were stable.

The California crash comes less than a day after a bus carrying 42 high school students and chaperones slammed into an overpass in Boston. Massachusetts state police said 35 people were injured in that crash..

Associated Press writers Andrew Dalton in Los Angeles, and Amanda Kwan and Bob Seavey in Phoenix contributed to this report.