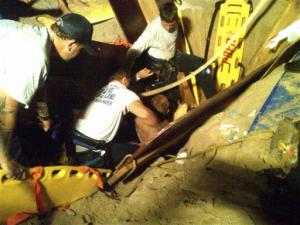 POMPANO BEACH, Fla. – A member of the Austrian Olympic swim team had to be rescued after he used a bucket to dig a large hole that collapsed and trapped him, authorities said.

It took 60 rescuers two hours to free Jakub Maly, 19, who had spent a few hours Sunday digging the hole that was 7 feet deep and 6 feet wide. It’s not clear why he jumped in after he finished digging. Rescue officials asked a teammate to lean over the hole and talk to Maly during the rescue, according to fire rescue officials.

“He looked more in shock when he came out,” said Pompano Beach Fire Rescue spokeswoman Sandra King. “He was obviously traumatized.”

Maly was in danger of being crushed by the pressure from the sand. The swim team first dug out Maly’s head so he could breathe, and rescue officials gave him an oxygen mask as soon as they arrived. Large boards were placed along the outside of the hole to keep more sand from falling in on him, King said.

Maly was taken to North Broward Hospital and released early Monday. He and his team were scheduled to leave South Florida by early Monday afternoon, King said. It wasn’t immediately known what injuries Maly sustained or if he dug the hole alone.

King said the Austrian Olympic team had been training in South Florida since April. Sunday was an off day for team members.