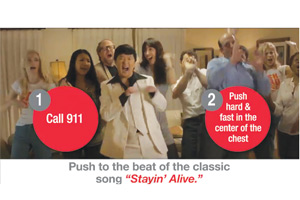 New CPR Video Stays Alive
A YouTube video hosted by the American Heart Association (AHA) for hands-only CPR has generated more than 365,000 views in its first few weeks and has been the talk of the EMS community and CPR instructors. The video features The Hangover actor, comedian and physician Ken Jeong, dressed in a classic leisure suit and teaching viewers to start CPR to the beat of the Bee Gee’s disco classic, “Stayin’ Alive.”

It’s short, funny, to-the-point and educational. We commend the AHA for its efforts to creatively use comedy and entertainment as a learning tool for teaching CPR.

Going the Extra Mile
A Massachusetts ambulance service’s generosity and assistance is helping with the success of a much needed EMS project in the Dominican Republic. North Adams Ambulance Service wanted to put a 1994 Road Rescue Type III ambulance with 65,000 miles to good use after they purchased a replacement vehicle.

After hearing from Jessica Coffelt, coordinator of American relations for the Marian Foundation of St. Isidore (FUMSIL), a Dominican Republic-based Catholic charity, that they were looking for an ambulance to serve several Dominican/Haitian border towns and villages, North Adams Ambulance Service decided to donate the ambulance to them.

Then, after correspondence about the delivery of the ambulance to Miami–a trip four lucky North Adams Ambulance employees got to make in February–the service decided to do more.

If the ambulance service and the charity can find the funding, five educators from North Adams Ambulance Service will travel to the Dominican Republic to help train and establish an EMS program with an existing clinic, according to A.J. Jusino, instructor-coordinator for North Adams Ambulance.

The donated ambulance is worth about $5,000, but its value is priceless to the people it will serve. We give a thumbs up to North Adams Ambulance for doing more than the minimum when it comes to charitable needs. And if their generosity results in a new group of trained EMTs in that area, JEMS will raise a high five.

CPR Before Driver’s License?
Ohio legislator Rep. Cheryl Grossman, R-Grove City, is initiating a bill that would call for teenagers to sign up for a CPR-training course before they can apply for a driver’s license. The new bill proposes that teenagers younger than 18 will have to show proof that they’ve completed a first-aid and CPR course within a year after applying for a driver’s license.

Ohio State Medical Director Carol Cunningham, MD, FACEP, FAAEM, a JEMS Editorial Board member, says any program that helps save a life is great and that learning CPR is essential–as long as equal opportunity exists for all teens to take this course.

House Bill 283 will require the state registrar to publish a list of available organizations that offer the approved first-aid and CPR classes. As long as the classes are certified, they can be offered through several mediums, including driver’s education schools and high schools.

We applaud Rep. Grossman for initiating a program that will not only have a positive effect on teens, but will also have the potential to save many lives. If the bill passes, teens will also become a new wave of first responders in their communities.

On-Duty Rig Pulled Over
A paramedic in Stillwater, Okla., was arrested while on duty in an ambulance.

Timothy Grauberger, 37, was working on a LifeNet ambulance when police in possession of a warrant pulled over the ambulance and arrested him in connection with a bogus check written for more than $500.

Kelley McCauley, LifeNet general manager, said in a statement that Grauberger hasn’t worked for the company since the arrest, and that disciplinary action hasn’t yet been determined because they’re waiting for more information about the charge and a final resolution.

McCauley also confirmed that LifeNet conducts extensive background checks on all employees; Grauberger’s was completed two months before his charge.

We give a thumbs down to Grauberger for the alleged conduct that caused police to issue an arrest while he was on the job and to the Stillwater Police Department for pulling the ambulance over, placing it temporarily out of service. They should have picked up Grauberger before or after his shift.

Luckily, no patients were in the ambulance when it was pulled over, and the police department stated that if a patient were on board, matters would have been handled differently. JEMS

This article originally appeared in September 2011 JEMS as “Last Word: The Ups & Downs of EMS.”