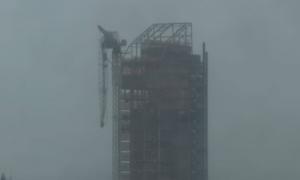 NEW YORK (AP) – A construction crane atop a $1.5 billion luxury high-rise in midtown Manhattan collapsed in high winds Monday and dangled precariously, prompting plans for engineers and inspectors to climb 74 flights of stairs to examine it as a huge storm bore down on the city.

Some buildings, including the Parker Meridien hotel, were being evacuated as a precaution and the streets below were cleared, but there were no immediate reports of injuries. City officials didn’t have a number on how many people were told to leave.

Authorities received a call about the collapse at around 2 p.m. as conditions worsened from the approaching Hurricane Sandy. Meteorologists said winds atop the building could have been close to 95 mph at the time.

The nearly completed high-rise is known as One57 and is in one of the city’s most desirable neighborhoods, near Carnegie Hall, Columbus Circle and Central Park. It had been inspected, along with other city cranes, on Friday and was found to be ready for the weather. Mayor Michael Bloomberg said later Monday it wasn’t clear why the accident happened.

The harrowing inspection was being undertaken by experts who are “the best of the best,” city Buildings Department spokesman Tony Sclafani said.

The New York Times recently called the building a “global billionaires’ club” because the nine full-floor apartments near the top have all been sold to billionaires. Among them are two duplexes under contract for more than $90 million each.

Shannon Kaye, 96, lives in the building next door.

“We heard a noise, but we didn’t know what it was,” she said. Minutes later, she and her neighbors were told to leave.

“I never liked that building, looking down into my bedroom,” she said. “I always had the feeling that something would come falling down from it.”

The Buildings Department had suspended work at the building at 5 p.m. Saturday. It reminded contractors and property owners across the city to secure construction sites and buildings.

The crane was owned by Bovis Lend Lease, one of the largest construction companies in the city. Bloomberg was careful not to blame the company, and said it would be days before officials figured out what happened.

Construction cranes have been a source of safety worries in the city since two giant rigs collapsed within two months of each other in Manhattan in 2008, killing a total of nine people.

Those accidents spurred the resignation of the city’s buildings commissioner and fueled new safety measures, including hiring more inspectors and expanding training requirements and inspection checklists.

Another crane fell and killed a worker this April at a construction site for a new subway line. That rig was exempt from most city construction safety rules because it was working for a state-overseen agency that runs the subway system.

Like Monday’s accident, one of the 2008 crane collapses also centered on the rig’s long, mobile arm, known as a boom. In the May 2008 accident, the boom broke off a roughly 200-foot-tall rig, crashed into a nearby building and plummeted to the ground.

Prosecutors blamed that collapse on what they called a penny-pinching repair to a crucial component that lets the boom swivel. Lawyers for that crane’s owner, who ultimately was acquitted of manslaughter charges, said the operator made a mistake that tipped the boom over backward and snapped it.