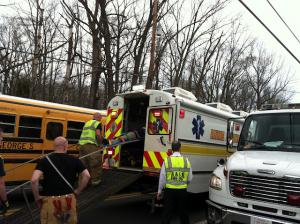 The buses had just departed Fredrick Douglas High School and were loaded with students going home when the crash occurred near Route 301 in Marlton, Md.

Diamond Smith was in the middle bus and felt the jarring jolt from both ends.

“When it hit in the back … we went back. I hit my head in the seat, and my neck jerked,” said Smith.

“I got thrown, and I hit my head. That hurt,” said student Brandy Jackson.

Paramedics treated 75 students at the scene. Thirty-four others were transported to Prince George’s Hospital Center where the triage extended to the outside while parents waited in a separate area.

“They could have handled it a little better,” said parent Lynn Montgomery.

Officials say all the students were treated for only minor injuries, but the emotional impact is something many students and parents are still coping with.