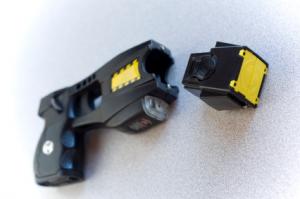 This is a prospective, interventional, controlled trial of resting, healthy adults exposed to a continuous electrical weapon (CEW) after consuming alcohol. All adults were either clinically intoxicated or had a minimum blood alcohol level of 0.08 mg/dL at the time of the exposure to a CEW. The investigators obtained venous pH, PCO2, bicarbonate, and lactate to look for clinically significant metabolic acidosis after exposure to a CEW and while intoxicated. A series of samples were taken: baseline, at intoxication, immediately after CEW exposure and a 24-hour follow-up after exposure. Though the investigators found clinically significant changes in all lab values, all were consistent with previous studies examining relationships between alcohol consumption and/or strenuous exercise. The investigators conclude the use of CEWs in intoxicated adults isn’t likely to cause significant physiological changes that may result in death.

Medic Marshall: “Don’t tase me bro! Don’t tase me.” I’m sure we’re all familiar with the YouTube video of the college student being tased at a political speech by Senator John Kerry. We may chuckle at this. We may even think, “Man”¦ that dude had it coming.” But what about the person who’s high on drugs, has some sort of metabolic imbalance, is psychologically impaired (or any combination of those, fights with officers and is then “tased”? Taking it a step further, the patient dies (although rare) as a result of being subjected to an exhaustive fight with law enforcement. Now, it’s become a real problem.

Are law enforcement officers trained to recognize these potential patients, or do they just see another bad guy who’s out of control? I don’t know because I’m not in law enforcement, but I think it’s a valid point. These are sick people who not only present law enforcement with trouble, but they can also present EMS with a world of difficulty in treating them. Even if tasers are “proven” to be safe (on healthy, barely intoxicated individuals who volunteered), failure to recognize life-threatening conditions can lead to disastrous outcomes.

Doc Wesley: Although I highly respect the authors of this study, I’m not sure they’ve added to our knowledge of the physiologic effects of conductive CEWs. We are well aware of excited delirium and the correlation of that condition and death in custody. CEWs have been implicated by some, and these authors have in the past provided significant insight into the pathophysiology of excited delirium and low probability that CEWs are the cause of death.

However, in this study, the subjects were medical and law enforcement personnel attending a TASER International conference. The level of alcohol intoxication (0.11 mg/dL) was relatively low compared to the agitated drunk we usually encounter. Additionally, although the authors didn’t provide the physical characteristics of the subjects, my experience with such conferences would be that they were generally healthy and fit. The average excited delirium or intoxicated alcoholic is usually obese and has significant underlying medical conditions such as hypertension, cardiomegaly, and concurrent use of mental illness medications.

I appreciate the attempt the authors have made, but I’m afraid this study doesn’t support the argument that CEWs do not have significant physiologic effects.