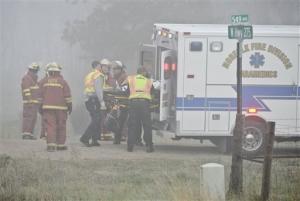 NORFOLK, Neb. (AP) – Two girls who were injured in a collision between a school bus and semitrailer in northeast Nebraska are reported to be in serious condition.

Officials say eight of the 13 students aboard the bus were sent to hospitals after Monday morning’s accident four miles west of Norfolk. Two of them were transferred to Omaha hospitals. The rest were treated and released.