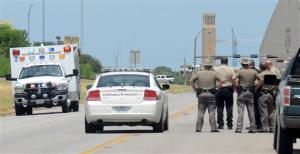 COLLEGE STATION, Texas (AP) – The gunman in a deadly shootout near Texas A&M University had multiple weapons, fired numerous times and was fatally wounded by officers who responded to reports of gunfire, police said Tuesday.

Police would not say whose gunfire struck the six others in Monday’s shootout, including a constable and a bystander who died from their wounds.

Thomas Alton Caffall III, 35, had “some long guns and pistols” in his home, College Station Police Chief Jeff Capps said Tuesday, but would not give details and did not say whether the weapons had been obtained legally.

“The crime scene is still being processed,” Capps said. “That will go on. It covers a couple of blocks.”

Brazos County Constable Brian Bachmann, 41, was fatally wounded by Caffall as he approached the rental home to deliver an eviction notice Monday. College Station resident Chris Northcliff was described by police as being at least 100 yards away when he was mortally wounded. Police confirmed his age Tuesday as 51; earlier, they said he was 43.

Capps said he wasn’t aware of any previous law enforcement contact with the gunman.

Just after noon Monday, College Station police began fielding frantic 911 calls about gunfire in the neighborhood near the university’s football stadium. Responding officers found Bachmann, 41, shot on the lawn of the house.

“Either upon approach to the house or shortly after, it appears he was shot by the suspect,” Capps said Tuesday. Bachmann was a police instructor, one-time Officer of the Year and a married father of two.

A neighbor and former medic, Rigo Cisneros, called 911 when he heard the shooting. He took video with his cellphone that showed police officers running into Caffall’s house. Cisneros, 40, can be heard asking an officer if an ambulance is coming and if he can tend to Bachmann’s wounds. The officer told Cisneros he must wait until the scene is secure.

Cisneros told The Bryan-College Station Eagle that by the time he was allowed to approach Bachmann’s body, it was too late.

“I performed CPR. There were no vital signs on the constable when I got there,” he said. “He took one clear gunshot wound to the chest.”

Cisneros said he also tended to Caffall, who was shot several times but still conscious.

“I was asking him questions, like if he knew he was allergic to anything,” Cisneros told the newspaper. “He looked up at me and asked me to apologize to the officer that was shot.”

Details about Caffall were slow to emerge. Officials at Texas A&M, the 50,000-student school that dominates the city 100 miles northwest of Houston, said he was neither a student nor school employee.

Caffall’s sister said Monday night that the family was shocked by the violence.

“Our hearts and prayers go out to the families and this is just a senseless tragedy,” said Courtney Clark, reached Monday evening at her mother’s home in Navasota, about 20 miles south. “We are just distraught by the havoc that he has caused.”

Besides the three fatalities, 51-year-old Barbara Holdsworth, of Houston, was wounded in the shoulder. She was serious condition as of Tuesday morning.

College Station Police Officer Justin Oehlke was treated for a gunshot wound in the calf and was in stable condition, police spokeswoman Rhonda Seaton said. Two other officers – Brad Smith and Phil Dorsett – were treated for “shrapnel injuries” and released, Seaton said.

According to the Officer Down Memorial Page, a database of slain law enforcement officers, Bachmann is the first Brazos County constable killed in the line of duty since Randall Millican was gunned down in December 1889. Millican held the post in the same county precinct.

Associated Press writers Juan A. Lozano in Houston, Nomaan Merchant in Dallas and Melissa Nelson-Gabriel in Destin, Fla., contributed to this report.