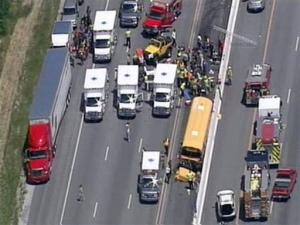 Thirty students from Waggener High School in Louisville were taken to hospitals with various injuries, along with four adults aboard the bus – including the driver, said Jody Duncan, a spokeswoman for Metro Safe, the emergency management agency for Louisville and Jefferson County.

The extent of injuries ranged from minor to critical, she said.

The students, who will be juniors and seniors in the next school year, were on their way back to Louisville after visiting Eastern Kentucky University in Richmond, said Jefferson County public schools spokesman Ben Jackey said. The adults aboard the bus included staff from Waggener, he said.

The group was being transported by a charter bus service, Jackey said.

TV video showed the injured being placed in ambulances at the crash scene.

The crash occurred around 2:30 p.m. EDT as the bus was headed westbound on Interstate 64 near the Jefferson-Shelby county line.

Authorities were investigating the cause, but Duncan said possible tire trouble was among the possibilities.

The students were participating in a program that gives students a chance to visit different college campuses, Jackey said.

A second bus carrying Waggener students on the outing was not involved in the crash, Jackey said. That bus eventually returned safely to the Louisville school and dropped off students, he said.

Kentucky Transportation Cabinet spokeswoman Andrea Clifford said a second accident occurred nearby in the eastbound lanes of I-64.