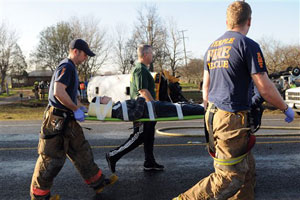 TEMPLE, Texas (AP) – Several students and an adult had to spend the night hospitalized following a Central Texas collision between a school bus and a delivery truck.

The Academy Independent School District says four students and the school bus driver were still hospitalized Wednesday, a day after the wreck near Temple. Superintendent Kevin Sprinkles says one student and the driver were in critical condition.

A spokeswoman with Scott & White Memorial Hospital in Temple had just three students and the bus driver listed as patients. Hospital officials Wednesday did not immediate clarify the difference in the patient numbers.

Investigators say the accident happened when the hardware truck clipped the Academy school bus, knocking the bus on its side. More than 30 people were hurt.