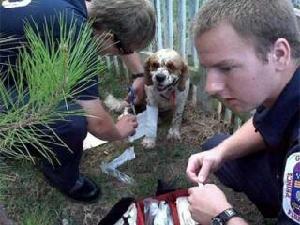 A person calling 9-1-1 reported a pit bull attack in the 5700 block of 66th Ave.  The victim’s leg was bleeding uncontrollably. Animal Control officers and Prince George’s Co. Police were dispatched.

Police arrived first and found a 3-year-old Cocker Spaniel named Peluche suffering from bite wounds to his paws.  Animal Control were not close, so the police officer requested assistance from the firefighter/medics.

In a press release, Prince George’s County Fire and EMS spokesman Mark Brady says, “Providing first-aid to an injured animal is not common, yet, is another service Prince George’s County Firefighters and Paramedics are placed in a position to provide on an as-needed basis. Personnel understand the importance of pets to families and are grateful to assist when and where possible while keeping safety of themselves and others as a priority.”

In an ironic twist, one of the first responders, Janice Francis worked for three years as a veterinary technician before becoming a paramedic.

“I used some of my experience and training,” she said.