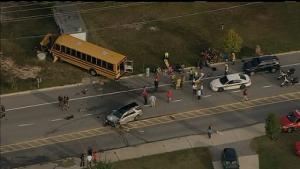 WALDORF, Md. (MyFoxDC) – Thirty-five students riding on a school bus in Charles County were taken to the hospital after a car hit their bus.

Authorities say a Cadillac Escalade hit the bus head-on around 8 a.m. Wednesday in Waldorf. Crystal Hunt with the Charles County government says five students who sustained injuries were taken by ambulance to the hospital. The rest of the students went to the hospital as a precaution.

The driver of the SUV was injured and transported by helicopter to a hospital and is reported to be in stable condition. The driver of the school bus suffered non-life-threatening injuries and was taken to the hospital.

All the students attend North Point High School. The crash happened in the 2400 block of Davis Road near the school.