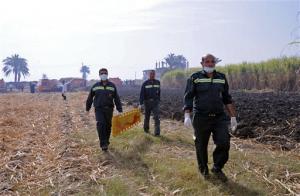 LUXOR, Egypt (AP) – A hot air balloon carrying tourists over Egypt’s ancient city of Luxor caught fire Tuesday, and some passengers trying to escape the flames leaped to their deaths before the craft crashed in a sugar cane field. At least 19 tourists were killed in one of the world’s deadliest ballooning accidents.

The accident was a new blow to Egypt’s tourism industry, which has been gutted by the country’s turmoil the past two years. The southern city of Luxor, site of some of the most dramatic pharaonic temples, has been particularly hard hit, with empty hotels worsening the area’s poverty.

After the early morning crash, authorities suspended hot air balloon flights, a popular tourist attraction here, while investigators worked to determine the cause. The crash raised accusations that authorities have let safety standards fall amid the political instability since the 2011 fall of autocrat Hosni Mubarak – though the civil aviation chief insisted his ministry keeps stringent inspections of balloons.

The balloon was carrying 20 tourists – from France, Britain, Belgium, Hungary, Japan and Hong Kong – and an Egyptian pilot on a sunrise flight over Luxor, officials said.

According to initial indications, it was in the process of landing after 7 a.m. when a landing cable got caught around a helium tube and a fire erupted, according to an investigator with the state prosecutor’s office.

The balloon then shot up in the air, the investigator said. The fire set off an explosion of a gas canister and the balloon plunged some 300 meters (1,000 feet) to the ground, according to an Egyptian security official. It crashed in a sugar cane field outside al-Dhabaa village just west of Luxor, 510 kilometers (320 miles) south of Cairo, the official said.

The official and the investigator spoke on condition of anonymity because they were not authorized to talk to the media.

“I saw tourists catching fire and they were jumping from the balloon. They were trying to flee the fire but it was on their bodies,” said Hassan Abdel-Rasoul, a farmer in al-Dhabaa. He said one of those he saw on fire was a visibly pregnant woman.

Bodies of the dead tourists were scattered across the field around the remnants of the balloon, as rescue officials collected the remains in body bags.

The crash immediately killed 18, according to Luxor’s governor, Ezzat Saad. Two Britons and the Egyptian pilot were taken to the hospital, but one of the Britons died of his injuries soon after. The other Briton and the Egyptian, who state media said suffered severe burns, were flown to Cairo for further treatment.

Among the dead were nine tourists from Hong Kong, four Japanese – including a couple in their 60s – and two other Britons, according to Egyptian officials or tourism authorities from the home countries.

Hot air ballooning is a popular pastime for tourists in Luxor, usually at sunrise to give a dramatic view over the pharaonic temples of Karnak and Luxor and the Valley of the Kings, a desert valley where many pharaohs, notably King Tutankhamun, were buried.

The toll puts the crash among the deadliest involving a recreational hot air balloon. In 1989, 13 people were killed when their hot air balloon collided with another over the Australian outback near the town of Alice Springs.

After the 2009 accident, Egypt suspended hot air balloon flights for several months and tightened safety standards. Pilots were given more training and a landing spot was designated for the balloons.

But Tuesday’s crash raised accusations that standards had fallen, and many in Luxor were afraid it would only further damage tourism in a city that relies on foreign visitors.

“Tourism is dying here already and the tourists killed in the balloon will make things worse,” said Mohammed Osman, head of the Luxor’s Tourism Chamber. He blamed civil aviation authorities, who are in charge of licensing and inspecting balloons, accusing them of negligence

“There is no oversight, and no one is checking anything. I don’t want to blame the revolution for everything but the laxness started with the revolution,” he said. “These people are not doing their job, they are not checking the balloons and they just issue the licenses without inspection.”

Civil Aviation Minister Wael el-Maadawi, who flew to Luxor to oversee the investigation, said the balloon that crashed had been inspected earlier this month as a requirement for renewing the company’s license. Speaking to Al-Jazeera Mubasher television, he said safety standards were “normally high” and that there must have been extreme circumstances that led to the crash.

“This is a painful accident,” he said. “It is premature to say whether it is maintenance or a human error until the investigation is over, whether the tube was unhooked because of a maintenance error or because it was pulled, someone stepped on it and pulled it.”

The Civil Aviation Ministry, like much of Egypt’s administration, has seen some political disputes since Islamist President Mohammed Morsi came to power in June as Egypt’s first freely elected leader.

The ministry was long dominated by military officers or former officers, some of whom have resented control by a civilian president, particularly one who hails from the Muslim Brotherhood. In other ministries, observers say Brotherhood members have been appointed, or included as volunteers, in many posts.

One civil aviation ministry official told The Associated Press that standards have fallen since civilians were brought in to some middle-ranking positions. The official said inspections have become more lax, taking place oncee a month instead of weekly. The official spoke on condition of anonymity to speak on the issue.

Egypt’s tourism industry has been decimated since the 2011 uprising and the political turmoil that followed and continues to this day. Luxor’s hotels are currently about 25 percent full in what is supposed to be the peak of the winter season.

Scared off by the turmoil and tenuous security following the uprising, the number of tourists coming to Egypt fell to 9.8 million in 2011 from 14.7 million the year before, and revenues plunged 30 percent to $8.8 billion.

Poverty swelled at the country’s fastest rate in Luxor. In 2011, 39 percent of its population lived on less than $1 a day, compared to 18 percent in 2009, according to government figures.

Magda Fawzi, whose company operates four luxury Nile River cruise boats to Luxor, said she expects the accident will lead to tourist cancellations. Tour guide Hadi Salama said he expects Tuesday’s accident to hurt the eight hot air balloon companies operating in Luxor, but that it may not directly affect tourism to the Nile Valley city.

In August, Morsi flew to Luxor to encourage tourism there, about a month after he took office and vowed that Egypt was safe for tourists.

“Egypt is safer than before, and is open for all,” he said in remarks carried by the official MENA news agency at the time. He was referring to the security situation following the 2011 ouster of autocratic leader Hosni Mubarak.

Deadly accidents caused by poor management and a decrepit infrastructure have taken place since Morsi took office. In January, 19 Egyptian conscripts died when their rickety train jumped the track. In November, 49 kindergarteners were killed when their school bus crashed into a speeding train because the railway guard failed to close the crossing.

The Muslim Brotherhood, Egypt’s most powerful political force and Morsi’s base of support, blames accidents on a culture of negligence fostered by Mubarak, under whose rule the country saw a number of devastating accidents.