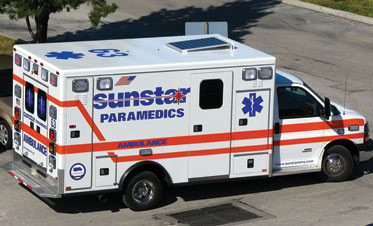 Terence Ramotar, director of support services, says the 45à50 ambulances Sunstar deploys need a lot of fully charged batteries to run power stretchers, portable ECGs, laptops and cell phones. Paramedics get fresh batteries when they report for work and turn them in at the end of their shift. However, the batteries don_t hold a charge for an entire 12-hour shift, so supervisors must deliver charged batteries to crews throughout the day.

When Ramotar looked into how other mobile vehicles dealt with electricity needs, he found that some RVs and sailboats use solar panels to power appliances. He then used a shed roof to test his assumption that a 2’x3′ panel on the top of an ambulance could produce enough output to power portable equipment in an ambulance.

Sunstar took delivery of two solar panel-equipped ambulances from American Emergency Vehicles in early December, ran more tests for about a month and deployed the vehicles in mid-January.

Within the next 24 months, Sunstar plans to replace all its ambulances, and each will come complete with a solar panel.

Thumbs Up for an idea that benefits the company and contributes to the health of the environment.

AP Maligns Paramedics
Just about every paper in the U.S. ran an Associated Press (AP) story in December with the headline “Paramedics accused of molesting patients.” It reported that during the past 18 months, “at least 129 ambulance attendants across the U.S. have been accused of sex-related crimes on duty or off.” Yikes!”ž

We can just imagine how many people instantly decided they would forever drive themselves or their loved ones to the hospital rather than dialing 9-1-1 and risking a ride with a sexual predator. Few people likely read the entire story and considered the reality.

First, “accused” doesn_t mean convictedÆ’or even charged. (How many times have”žyou transported a patient with mental-health issues who could have made an unfounded accusation against you?)”ž

Second, just before listing “some of the more shocking cases,” the AP reporter noted, “Exactly how many of these EMTs were alleged to have committed their crimes on the job is unclear.””ž

And finally, those who read the entire story would find there are some 900,000 EMTs and paramedics in the U.S. So 127 out of 900,000 is a really, really small numberÆ’one-hundredth of a percent! (We wonder how many physicians or nurses are accused of sexual improprietyÆ’on and off the jobÆ’every 18 months? Having that number would likely put things into perspective.)

Of course, we_re appalled that”žany”ž EMTs and paramedics have“ž molested patients. And we believe states should conduct or require background checks for EMS practitioners. But sensationalized stories that needlessly scare the public do a disservice to EMS and the patients who need us.

Don_t Need No”žEducation?
In a scandal that could prove not just inconvenient, but quite costly, nine police officers in Hamilton, Mass., are under fire for fabricating medical training records for the past eight years.”ž

The Hamilton Police Department (HPD) requires its officers to be state-certified EMTs and to request courses on procedures they_re rarely called upon to perform in the field. But the training officer didn_t speak up when courses weren_t being requested (he hadn_t given a course on glucometer use for at least five years) and, when asked, the police chief didn_t know who was supervising the use of the oversight-required equipment.”ž

Now the department is at the center of a state investigation and the Office of EMS has suspended the town_s ambulance license for a year and pulled the licenses of the nine officers, including the chief, saying they “endangered public health and safety.””ž

Hamilton residents are incensed that the officers were paid for training they never took, and allegations are even surfacing that public officials may have known about the problem going as far back as 2000. Thumbs Down to everyone who turned a blind eye to this deceit.“žJEMS 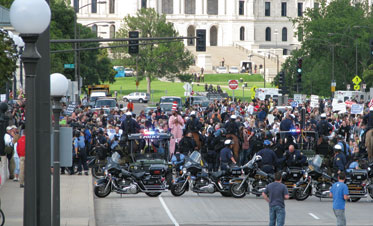 The Republican National Con_vention (RNC) brought some 50,000 delegates, dignitaries, reporters and protestors to”žMinnesota_s Twin Cities Sept. 1à4. The feds provided $50 million to help public safety handle this volatile mix of visitors, but most of the money went to law enforcement, leaving little for”žEMS expenses. Nevertheless, the area_s 29″žEMS agencies rose to the occasion, spending a fortune in donated time and resources, and reaping valuable intangibles along the way.

Ë™Minneapolis,”žSt. Paul and the region took this opportunity to collaborate and create something that will last. There was total collaboration, even on the part of the hospitals,à“ says Metro Region EMS Coordinator Ron Robinson, MA, NREMT-P.

Ë™The planning experience alone brought the local”žEMS community together as a”žgroup; there was a ton of collaboration. This strengthened relationships between EMS services in”žMinnesota, and not just between metro-area services,à“ says Jeffrey Lanenberg, EMT-P, South Metro manager for Allina Medical Transportation (which covers many Twin Cities suburbs).

Despite de_mon__stra__tions, during”žwhich police used tear gas, pepper”žspray, concussion grenades and other Ë™less-than-lethal devices,à“”žEMS saw far fewer patients”žduring the RNC than expected. One reason may have been the 38 volunteer Ë™street medics,à“ a mixture of professional health-care providers and volunteers with little medical training, who provided first aid to protestors during demonstrations.

Before the RNC, the Hennepin County EMS Council and a local physician group handed out cards to these street medics thanking them for their efforts and asking them to help control the crowds while”žEMS moved patients to ambulances. Ë™I think that was very professional and really helped contribute to the well-being of people in the street,à“ says Simon Cecil, EMT-B, spokesperson for the North Star Health Collective, the activist group that recruited, trained and coordinated the street medics.”ž

Cecil faults police for arresting 24 street medics, sometimes while they were caring for patients, but says, Ë™I_ve nothing but positive things to say about what [local]”žEMS did and how they responded to our medic teams on every level. When we transferred patients to them, they were very helpful.à“”ž

JEMS also has only positive things to say about how Twin Cities EMS leaders and responders met the RNC challenge.

He notes the paramedics had several weeks_ warning before the test, but unlike the other three ALS first response departments in the county, NFD Ë™had no one doing training and no training officer.à“ Tober also contends, Ë™over the past 12 months, they_d never opened that drug box.à“

He vowed to replace the drug boxes once the paramedics bone up on their meds and”žpass a re-test. But those drug boxes won_t”ž con_tain all 16 meds they once did. Tober re_cently removed eight of 16 meds from drug boxes carried by”žall ALS engines in the county. Ë™They weren_t using them,à“ he says. Ë™When you have someone giving you drugs in an emergency, you want someone who_s trained and who has relatively recent experience.à“

Thirty years ago, Tober helped create award-winning Collier County EMS”ž(CCEMS), which provides all emergency”žtransports. He resisted the advent of ALS first”žresponders in the county, concerned that non-transport paramedics wouldn_t have enough opportunities to use their advanced skills to keep them sharp. Because of short CCEMS response times, he says, ALS first responders Ë™are hardly doing anything but vitals, oxygen, some cardiac monitors.à“ He wants first responders to focus on their BLS skills.

At its recent conference, the Florida Association of Medical Directors unanimously backed Tober_s right to make medical decisions for the community.

Thumbs Up to a courageous medical director who puts patients above politics.”žJEMS