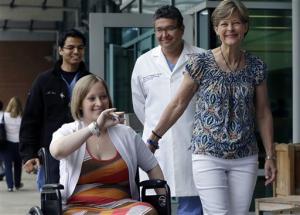 BOSTON (AP) – A 29-year-old preschool teacher who lost most of her left leg in the Boston Marathon bombing left the hospital Monday, saying she was excited to head home to the Baltimore area so she could hug loved ones, eat steamed crabs and spend time with her students.

“I just want to sit on the floor with them and read them a story,” Erika Brannock said of students at Trinity Episcopal Children’s Center in Towson, Md.

The teacher said she’d already sent a video of herself to her students “to kind of introduce them to my new body.”

Brannock had her left leg amputated above her knee, suffered severe bone and tissue damage to her right leg and also sustained hearing damage. She’s had 11 surgeries and may need more, one of her doctors said before she left Beth Israel Deaconess Medical Center for a flight home.

Hospital officials said Brannock was the last of the 24 patients who came to the hospital on the day of the bombings to be discharged. She is one of a number of bombing victims who face rehab and a long road to recovery.

“She will have a long course ahead,” Dr. Edward Rodriguez said of her rehab, which includes learning to walk again.

Brannock’s fight to survive began after the first bomb exploded near the marathon’s finish line. She remembers seeing flashes of orange and yellow and falling back slowly. She also heard screaming and soon realized something was wrong with her body.

Brannock said a fellow race spectator who identified herself as “Joan from California” took her hand and helped her with a tourniquet before rescuers got her on a stretcher and into an ambulance. She never saw the woman again, but credits that stranger with helping save her life.

Brannock’s sister, Nicole Gross, a 31-year-old personal fitness trainer from North Carolina, spent about a month in a different hospital after the bombing left her with a broken leg and nearly severed an Achilles tendon. Gross’ 32-year-old husband Michael also suffered burns, cuts and bruises in the attack.

They were at the April 15 race because the sisters’ mother, Carol Downing, was running in the race. The 57-year-old was less than a half-mile from the finish line when the bombs exploded, killing three people and leaving her three family members among more than 260 people with injuries.

Downing said Monday that her family isn’t sure what their “new normal” will look like, but that she plans to run next year’s marathon for some closure.

Brannock, who will continue her recovery at her mother’s home in Monkton, Md., plans to return to teaching in the fall and finish her master’s degree. In the short term, she’s hoping to be at a graduation for some of the students at her school later this week.

“Today is 50 days and I think it just shows that it was a really long road, for not just me, for a lot of other people,” Brannock said.