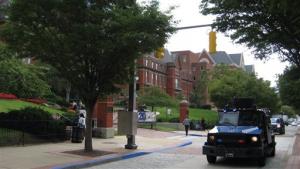 BALTIMORE – A man shot and wounded a doctor Thursday at world-renowned Johns Hopkins Hospital, then killed himself and a relative in a two-hour standoff inside the sprawling red-brick complex, police said.

Police spokesman Anthony Guglielmi told The Associated Press that the gunman and his relative died in a hospital room.

Guglielmi said earlier that he did not know the relationship between the gunman _ described as a man in his 30s _ and the doctor. The hospital said in a statement that the doctor is a faculty physician but that it could not release more information because of privacy policies.

The doctor was shot in the stomach but was expected to survive, Guglielmi said.

“The doctor will be OK,” Guglielmi said. “He’s in the best place in the world _ at Johns Hopkins Hospital.”

Michelle Burrell, who works in a coffee shop in the hospital lobby, said she was told by employees who were on the floor where the doctor was shot that the gunman was angry with the doctor’s treatment of his mother.

“Basically, he was upset about his mother being paralyzed by the doctor,” Burrell said. “It’s crazy.”

A small area of the hospital had been locked down before the gunman died, as about a dozen officers wearing vests and helmets and carrying assault weapons prepared to go into the hospital at midday. Guglielmi said the gunman had not taken any hostages, and people with appointments in other parts of the hospital were encouraged to keep them.

Hopkins spokesman Gary Stephenson said the gunman was on the eighth floor of the Nelson building, the main hospital tower. According to the Hopkins website, the eighth floor is home to orthopedic, spine, trauma and thoracic services.

Guglielmi said the situation was contained to that part of the hospital, and no people had been locked in rooms or otherwise in danger.

The rest of the massive hospital, research and medical education complex remained open, including the emergency department.

With more than 30,000 employees, Johns Hopkins Medicine is among Maryland’s largest private employers and the largest in Baltimore. The hospital has more than 1,000 beds and more than 1,700 full-time doctors.