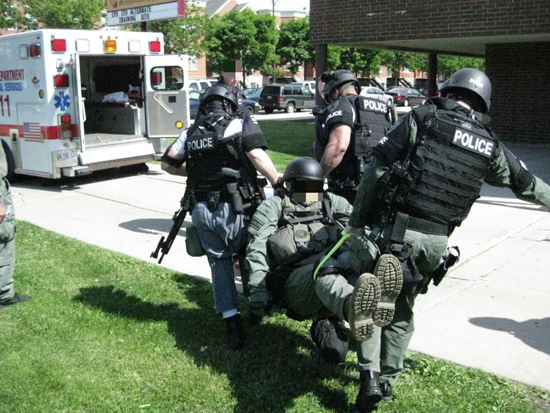 When members of the Chicago Police Department (CPD) approach hostile law enforcement situations, these brave officers are focused on neutralizing the threat. They’re not thinking about the “what ifs”: “What if my partner is injured in this operation?” “What if I’m injured?” “What if the only way to accomplish the mission and neutralize the threat is for the rest of my team to keep moving if I’m injured?”

In Chicago, the CPD knows that the Chicago Fire Department (CFD) has their back. They also know their fellow officers have been trained on basic self-aid and partner-aid in case of emergency. Most importantly, they’ve practiced this lifesaving medical care in simulated active shooter situations with CFD paramedics alongside them.

Traditional tactical EMS (TEMS) is built on a model whereby a rarefied group of medics, police officers and even physicians are crosstrained in the skills of the others’ specialties.2 Medics are trained to handle firearms and to enter hostile situations, and police officers are cross-trained in paramedicine. Because of this specialized training, these tactical support personnel train and drill together. They go on missions together. They must be ready as a unit and only as a unit.

In Chicago, a city covering 230 square miles with over 2.7 million residents,3 the traditional model of embedding a specialty-trained TEMS paramedic team with every high-risk police operation represented a logistic challenge that wasn’t feasible to implement. Combining the number of police operations with the realities of EMS shift requirements would mean that a large number of CFD EMS would be dedicated solely to TEMS operations. In an already busy EMS system in which labor union considerations are important as well, such a structure would leave little room for everyday EMS response.

Additionally, with the realities of today’s violent world and the increasing number of hostile situations, any police operation could potentially become limb- or life-threatening for any law enforcement personnel.

A new, more practical approach to implementing a TEMS-like program with medical support was needed. Therefore, eight years ago, a cross-departmental working group was formed to develop a multidisciplinary approach to hostile law enforcement scenes as an alternative to traditional TEMS.

The new Chicago-style approach focuses on interoperability and complementary training of CPD and CFD EMS personnel and employs principles of interagency response to hostile law enforcement situations and mass casualty incidents (MCIs), as recommended by the U.S. Fire Administration.4 In the hot zone, police manage the law enforcement scene and are trained in self-aid and partner-aid. Staged in the cold zone–close to the scene but in a secured location easily accessible for patient and law enforcement member egress–are CFD paramedics who know exactly what level of training the CPD personnel have and can anticipate hot zone treatment prior to extrication if an officer were to be injured.

CPD officers may not know the names or even faces of the CFD paramedic field chiefs, paramedics and firefighters/EMT-Bs who are staged in support of their mission, but all CFD EMS personnel will know what to do if the unthinkable happens to a CPD officer. Any CFD EMS crew can support CPD missions because of an interoperable TEMS-like model that is uniquely Chicago. 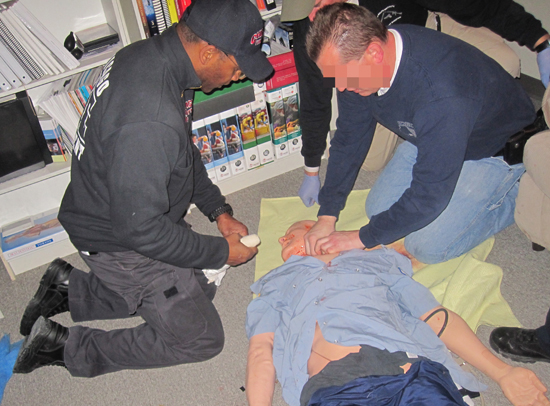 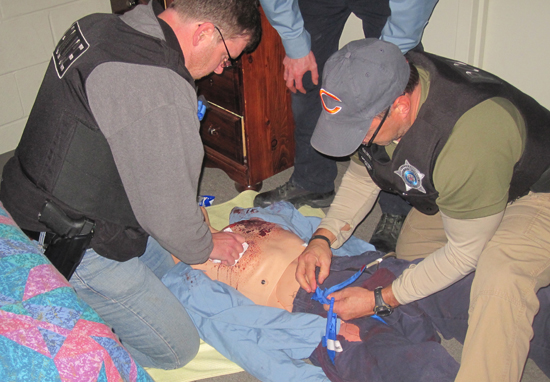 The interoperability of medical support and law enforcement wasn’t always present in Chicago. It was through a combined effort of the CFD, the CPD and the regional EMS medical directors that joint training, protocols and operations were developed. This has led to the mutual understanding among agencies that makes medical support of law enforcement operations in Chicago such a success.

The first step in the development of the interoperability model used in Chicago focused on the medical support of SWAT operations. In 2008, a small group of cross-trained CPD SWAT officers approached leadership from the CPD, the CFD and Northwestern Memorial Hospital–the lead hospital in Chicago Central EMS System and the medical oversight for the CPD–to propose a more collaborative approach to TEMS that bridged the interoperability gap. This group recognized that the CPD and the CFD didn’t have common protocols, training or even understanding of the others’ approach to SWAT operations. The SWAT Medic Assault and Rescue Technician (SMART) program grew out of this collaboration among the CFD, the CPD and the EMS system’s hospital medical directors to first address the medical needs of SWAT officers on active missions.

The SMART program was created with the U.S. Department of Defense’s Tactical Combat Casualty Care (TCCC) curriculum for tactical emergency casualty care and emphasizes self-aid and partner-aid of immediately life-threatening injuries at the point of wounding.5 The 56-hour SMART curriculum built upon a state-approved first responder course and added TCCC hemorrhage control protocols, sucking chest wound treatment and rapid extrication principles developed by the CFD. Self-application of tourniquets and hemorrhage control with combat gauze and hemostatic agents were taught to participants. The delivery of content occurred through joint simulation exercises with both the CPD and the CFD.

The SMART model revolutionized the emergency medical care and coordination during SWAT operations in Chicago. For this, the leadership of the SMART program was recognized with the 2009 National Tactical Officers Association’s TEMS Award of Excellence.6

The success of the SMART program revealed that shared protocols and joint training developed and implemented cooperatively by the CFD and the CPD was possible. Additionally, all involved realized that any law enforcement situation could become a hostile situation resulting in officers being injured. Increasingly, with events too numerous to list, first-line officers may be called to enter dangerous, uncontrolled scenes. These realities prompted the expansion of the SMART program to include CPD line officers as well.

The initial step in expansion occurred concurrently with the 2012 North Atlantic Treaty Organization (NATO) Summit conference preparations in Chicago. A lesson learned from SMART was that training law enforcement officers in first-aid principles led to better mitigation of MCIs. The line officer medical and rescue training (LOMART) course built upon the self-aid and partner-aid principles taught in the SMART course, but distilled the key components into an eight-hour course for officers assigned to cover NATO. The course was so overwhelmingly popular that the course was expanded to include all CPD officers. This new course, called law enforcement medical and rescue training (LEMART), extends this lifesaving training to every officer in the CPD.

The Chicago LEMART course emphasizes joint training between the CFD and the CPD, and represents effective, recurrent joint simulation drills between both agencies. LEMART courses are single eight-hour sessions of approximately 30 attendees held at least monthly. The majority of attendees are CPD officers, but a group of CFD paramedics and paramedic field chiefs attend every session.

The course begins with didactic lectures on the principles of hemorrhage control and the approach to the hostile law enforcement situations, as described in the Hartford Consensus document.7 Attendees then practice manipulating the tourniquet and hemostatic dressings by applying the device to themselves and others.

The afternoon portion of the session is entirely simulation-based and occurs at the state-of-the art CFD Simulation Training Center.8 Attendees encounter a series of live simulations of increasing complexity, which include physical exertion, dim lighting, loud ambient sound and distracting actors. The goal of the scenarios is to have the attendees practice under stressful situations, making the sessions as high-fidelity as possible to actual active shooter situations. The day ends with a debriefing, where each attendee states what they learned in the session. Comments during this part of the session often focus on the importance of the learned skills, the ease of application of the tourniquet and combat dressing, and an appreciation that the CPD and the CFD train together in the course.

Courses are taught by CPD sergeants and officers at the CFD training academy. Because the entire instructor team consists of CPD and CFD members, participants have a greater buy-in and appreciation for interagency interoperability through the course design. Using local expertise also allows the course to be cost-effective in its operation.

A clear highlight from eight years of SMART, LOMART and LEMART has been the ongoing support of CPD and CFD supervisors and officers, as well as administrative personnel–starting with the police superintendent and fire commissioner and going down both organizations’ command structures. However, the impetus to develop such a course began with a grassroots effort by former SWAT officers Ralph Cruz and Jeff Felton, who have now been promoted to sergeant and detective, respectively; SWAT officers Kenneth Adair and Andrew Ohlson, now with the FBI; CPD officer Nial Funchion; and CFD paramedic Sarah Cruz.

After developing the SMART curriculum, this working group approached Leslee Stein-Spencer of the CFD to include paramedics in joint training. Soon thereafter, standardized protocols were developed through the support of the CPD EMS medical director, Kenneth Pearlman, MD, and Northwestern Memorial Hospital EMS nurse coordinator, Patricia Lindeman. Before protocols were implemented, legal counsel for the city of Chicago, John Ehrlich, reviewed the proposal and supported its implementation. Today, Sergeant Cruz and Officer Brian Berkowitz are lead instructors for the courses. The success of the SMART, LOMART and LEMART programs represents an important collaboration among police, fire, medical direction and city governance to ensure the safety of police officers across Chicago. 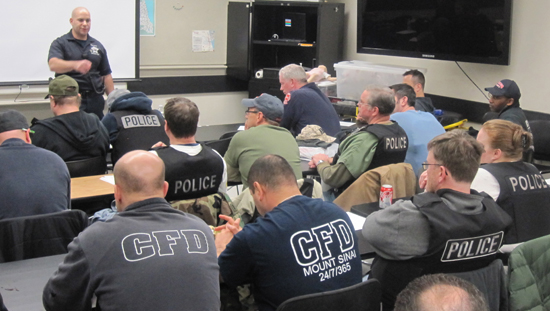 The LEMART curriculum has been met with overwhelming support by CPD and CFD members who have already completed the training program. LEMART has instructed hundreds of CPD and CFD members on the principles of self-aid and partner-aid. However, the program is still ongoing in its effort to train all 12,500 CPD officers.

Importantly, LEMART sets the stage for development of a joint active shooter policy and training program. The program is also being expanded to include CPD and CFD personnel into joint training exercises with Aviation Security officers at Chicago’s O’Hare and Midway Airports to emphasize the importance of interoperability among agencies. 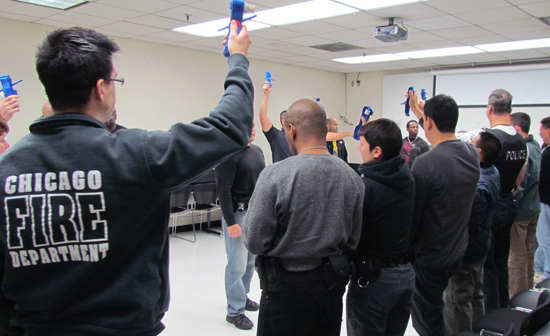 Chicago’s LEMART training program represents an effective, collaborative joint effort between the city’s police and fire departments to provide standardized care to police officers in harm’s way. Police, EMS and the EMS medical oversight are partners in the development, training and implementation of these lifesaving skills. This partnership leads to the interoperable approach to high-risk police operations, both within and between agencies. Chicago’s LEMART program can serve as a model for both large and small city systems where utilizing a defined cadre of cross-trained SWAT paramedics isn’t feasible.