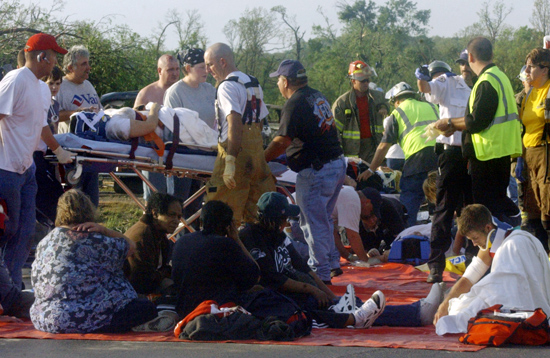 Since its initial release in 1987, the Center for Disease Control’s National Field Triage Decision Scheme (NFTDS) has been met with mixed uptake and use. Despite multiple revisions, researchers at the Western Emergency Services Translational Research Network (WESTRN), based in several large academic trauma centers, noticed variability in its national use. Authors chose to determine the use of the most common criteria from the NFTDS in the prehospital setting as well as non-decision scheme criteria implemented by EMS services.

Forty-eight EMS services in six western United State regions were retrospectively reviewed for all “trauma activations“–patients brought directly to a trauma center for stabilization–from January 2006 to December 2008. A total of 260,027 cases were reviewed, with 46,414 (17.8%) meeting the trauma activation criteria. All six regions used step 1—2 of physiologic and anatomic criteria from the Triage Decision Scheme for trauma activation, including: AMS, hypotension, rapid or slow respirations, proximal penetrating trauma, limb paralysis, and multiple long-bone fractures.

It’s worth noting that only two regions used “airway intervention” as a criteria for trauma activations, although the authors don’t specify if this is advanced or basic airway management. EMS provider judgment, added to the final step of the NFTDS in 2006, was used by all but one region during the study period.

Results: Despite being in the fourth and final step of the CDC’s decision scheme, EMS provider judgment was the most commonly identified reason for trauma activation in all regions, in 25.7% of all trauma activations.

The second-most common region for trauma activations was age <5 or >55 at 9.7%, which also came from the fourth step of the triage decision scheme. At only 12.2%, the combination of AMS, hypotension and abnormal respirations made up the top step of the triage decision scheme of determinants for field activation of a trauma. The authors didn’t study which criteria was the most accurate determinant of a major injury, only which were used most often.

This is great research from a group of top-notch facilities and EMS systems. Although only scratching the surface, it shows us there’s room for improvement in the NFTDS, something WESTRN appears to be working on. We look forward to more on this topic soon.

It seems like a shift in prehospital care is coming, causing the focus to move toward keeping patients out of the hospital when other options are available.

Coming to us from Oslo, Norway, where EMS is remarkably similar to the United States model, this is a study evaluating five-year mortality for patients treated for acute poising. Paramedics in this study were allowed to administer naloxone to acute opioid overdose and release them without transport. The mortality rate of these patients were compared with patients treated at four Oslo hospitals and one freestanding emergency outpatient clinic, which offered basic emergency care and could hold patients for up to 24 hours but couldn’t perform intubation, gastric lavage or blood gas analysis.

Outcomes were tracked five years after the end of the study period in 2008, and were simply monitored as alive, emigrated or dead via the National Population Register of Norway.

Outcomes: A total of 2,298 patients were enrolled in the study, with 253 excluded primarily due to an inability to be tracked. Of the 2,045 patients available for study, 686 were treated and released by EMS, 646 were treated at the outpatient clinic and 713 were treated at the hospitals. The study population was largely males (58%) with a median age of 35. Interestingly, a large majority (47%) of patients treated and released by EMS were for opioid-only overdoses, while 53% of clinic patients were for alcohol-related overdoses and 58% of the hospital patients were for prescription drug overdoses. This shows that the triage system used by Oslo Ambulance seems to deliver patients based on presenting toxin. During the five-year follow up, 285 patients died, 112 of which were ambulance patients.

When compared to the “expected number of deaths” by the National Population Registry (10) and the standardized mortality rate (12), this seems staggering; however, the Population Registry studies a much larger swath of the populous, whereas all patients in this study were treated for acute poisoning or overdose. The standard mortality rate (SMR) serves as a statistical analysis comparing an increase or decrease in mortality in a study population. For this study, the highest SMR, or increase in mortality rate, was for patients treated for opioid poisoning, but lowest among opioid poisoning patients treated at the hospital.

Only 12% of patients treated in-hospital died in the five years following treatment, the lowest of all three cohorts. It’s also worth mentioning that 101 of the 285 patients who died were due to accidents, largely drug related.

This data points toward hospital treatment being the safest method for care of poisoning or overdose patients, which comes as no surprise to EMS providers; however, we applaud the efforts of prehospital care providers in trying to keep patients out of hospitals.

Empathy is equally as important to the new EMS provider as clinical skills. Coming from Australia, paramedic students at Monash University were given the Jefferson Scale of Empathy—Health Profession Students (JSE—HPS) examination with results recorded anonymously.

The JSE—HPS is a 17-item survey with questions designed to rate students’ empathy with questions such as “Healthcare providers should try to think like their patients in order to provide better care.” Students then ranked their agreement to that on a scale of 1—7. Authors hypothesized that the JSE—HPS would be an adequate indicator of student empathy on two fronts: compassionate care and perspective taking. Although they found several items displaying poor item-to-factor fit, they did find that paramedic students reliably displayed empathy. It would be interesting to see this survey administered at the beginning and end of paramedic schooling to see if there’s a variability showing an increase or decrease in empathy.

BOTTOM LINE
What we know: Field triage varies from region to region, and even service to service.
What this study adds: A change to the National Field Triage Decision Scheme may be necessary, including adding paramedic judgment to a higher tier.