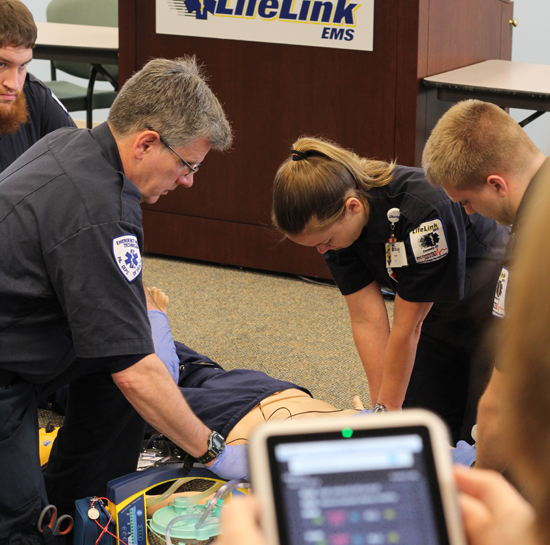 While at work in his office in State College, Pa., Steve, a slightly overweight 56-year-old male, develops a sudden onset of chest pain. Knowing that something isn’t right, he calls out for a co-worker to come over.

Julie rushes over and finds him lying on the floor unresponsive and not breathing. Remembering what she learned in a CPR class, she recognizes that Steve is having a serious medical emergency and yells, “Someone call 9-1-1!”

She rolls Steve onto his back and doesn’t feel a pulse. She starts pushing on Steve’s chest as hard and as fast as she can.

Fortunately, the office administration recently purchased an automated external defibrillator (AED) and received training on using it from their local EMS agency. Bill, another co-worker and part of the company’s emergency response team (ERT), runs to get the AED. When he returns, he applies it and turns it on.

Another member of the ERT calls 9-1-1 and gives the emergency telecommunicator as much information as possible. The county 9-1-1 center dispatches the closest ambulance and police officer to respond for a “reported cardiac arrest with CPR in progress.” 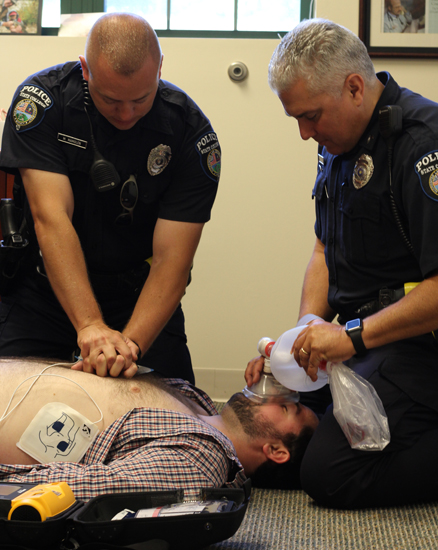 Local police respond to all medical emergencies in the Centre Region and are trained in basic first aid, CPR and AED use.

A police officer arrives and takes over chest compressions. His partner opens the oxygen kit carried in his police car and pulls out the bag-valve mask.

Just seven years ago, Steve and other victims of cardiac arrest in State College would die 96% of the time. That wasn’t acceptable to the staff and medical director of Centre LifeLink EMS, so a commitment was made to take action to significantly decrease this fatal percentage by implementing a community approach to saving lives. Today, because of a comprehensive approach to resuscitation, 20% of all cardiac arrest victims survive–more than double the national survival rate of 8%.1

This resulted in all personnel, including chief officers and administrators, being trained in high-performance CPR with continuous, uninterrupted and effective chest compressions. Laerdal SimMan simulators were used during the training to enable crews and instructors to recognize errors, correct them immediately, and validate the CPR and resuscitation improvements.

The Centre LifeLink team also realized that the traditional way first responders and their crews had manually performed CPR was no longer an acceptable way to achieve and maintain high-quality compressions. Not only is it physically taxing but it’s also dangerous for crews when performed in the back of a moving ambulance.

In an effort to solve these problems, the agency purchased a LUCAS 2 mechanical chest compression system, which can be customized to fit each patient and will administer continuous chest compressions two inches deep at precisely 100 compressions per minute, meeting the AHA standard.

After multiple resuscitations, Centre LifeLink EMS Chief Kent Knable, EMT-P, was able to equip all first-due ambulances with the mechanical chest compression device. It’s now the first line of treatment used on arrival of cardiac arrest calls. The EMTs and paramedics have become so proficient with the device that they can apply it in under 15 seconds, and the agency credits it as the primary driver for their improved uninterrupted compression times.

In addition to internal training and adding mechanical CPR to their cardiac arrest treatment arsenal, Centre LifeLink EMS also focused significant effort on fulfilling the “chain of survival”–the internationally recognized metaphor for the crucial steps that need to be addressed in order to produce a successful outcome in a cardiac arrest situation–through a variety of approaches.

Community training: In an attempt to focus on one key link in the chain–early CPR by bystanders–Centre LifeLink’s training department set a goal to train 15,000 community members in CPR and get as many AEDs into local businesses as possible. After seven years, in a community with a population of 43,757 people, the 15,000 goal was met and 43 AEDs were added in local businesses, gyms, churches, hotels and sports leagues. Moving forward, 1,000 community members continue to be trained annually.

In 2013, Centre LifeLink participated in the AHA and Pennsylvania HeartRescue Project’s “Lend a Hand, Save a Life” competition by training as many people in the community in hands-only CPR, where bystanders focus on pushing hard and fast on the chest to deliver properly timed chest compressions. The State’s goal was to train 250,000 people in five months. 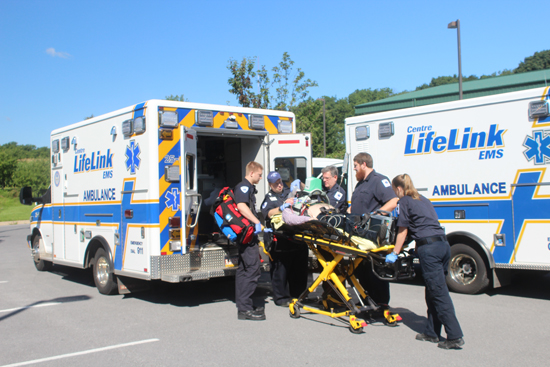 The survival rate in State College, Pa., increased from 4% to 20% by focusing on training, community involvement and forging strong links in the chain of survival.

“We were really impressed that so many community members wanted to take action and learn this lifesaving tool,” Shaw adds. “We also found that if these people learned hands-only CPR, they were more inclined to take a full class and actually become certified.”

Dramatic increase in AED use: As a result of community outreach efforts, bystander CPR has more than doubled since 2011. Even more impressive, the rate of bystander AED use prior to EMS arrival, nonexistent in 2011, has increased to 36%. “Having community members start CPR and apply an AED within the first minutes is absolutely crucial for survival,” says Knable.

Media support: Local media also factored into the increased survival rates. The Centre County, Pa., chapter of the Sudden Cardiac Arrest Association (developed by Centre Life- Link EMS) has had several success stories where a bystander played a key role in cardiac arrest survival. These successful resuscitation stories have been published and shared by local newspapers and news stations, each demonstrating how important it is for community members to know how to perform CPR.

Hospital link: The last important link in the chain of survival is the hospital. Mount Nittany Medical Center, the community hospital in the State College area, has taken steps to become an ST elevation myocardial infarction (STEMI)-receiving facility. ED physicians and nurses are highly trained and ready to intervene immediately. A STEMI team is on-call 24 hours a day to respond to a myocardial infarction using the latest technology to perform percutaneous coronary interventions and open coronary vessels.

In order to evaluate survival results and compare them across Pennsylvania and the U.S., Centre LifeLink joined the Cardiac Arrest Registry to Enhance Survival (CARES). “Having this information gives us an opportunity to see where we are and where we can improve,” says Centre LifeLink EMS Medical Director Clifford Neal, DO. “We know we can’t save everyone, but there’s a large group of sudden cardiac arrest patients that, if every link in the chain of survival is strong and functioning, we can save.”

The CARES data for 2014 shows the community’s Utstein bystander survival rate at 80%, more than twice the national average.1 (See Table 1, above.) This validates Centre LifeLink EMS’ long-term, multipronged approach to cardiac arrest. EMTs and paramedics can’t do it alone, and it takes the community’s help to ensure the links in the chain of survival remain strong. To save a life, it truly does take a village.

When the ambulance arrives, the EMT and paramedic apply the mechanical chest compression device and provide ALS care including starting an IV, administering medications and providing additional defibrillation that converts Steve’s heart rhythm to a normal rhythm with a strong pulse and blood pressure.

Steve is transported to Mount Nittany Medical Center, where he’s taken to the cath lab where physicians open one of the large vessels in his heart. He’s later admitted to observation and provided additional care. He’s discharged a few days later with no neurological deficit.

More on Resuscitation & Shock from JEMS.com

This article is sponsored by Laerdal Medical. For solutions and resources to help you effectively implement your BLS, ACLS and PALS training programs, please visit www.laerdal.com/2015AHAGuidelines.