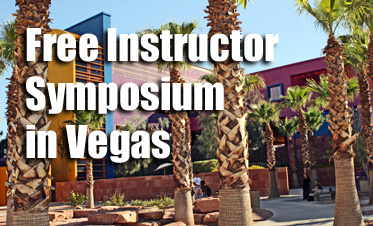 “Host it and they will come,” was the mantra I repeated to myself. Armed with that phrase and conviction, I marched down to my manager’s office and began to lay out my plan to hold an EMS instructor symposium in Las Vegas.

I sat across the desk from my manager and enthusiastically explained how I wanted to host and sponsor a free symposium that would be open to all EMS educators. It would present nationally recognized speakers, cater breakfast and lunch, and even include door prizes, I watched the disbelief wash across his face.

After I finished, he looked at me and said, “This sounds like a great idea. If you want to do this, I will support it.”

Once I had the approval and support of my supervisor, my first order of business was to secure a space to conduct the symposium. For that mission, I called on Rod Hackwith, EMS program director at the College of Southern Nevada. After I ran the plan by him, he began to look for an available room.

My next move was to schedule presenters, but with so many choices of wonderful educators and speakers in the EMS community, this process became more difficult than I originally thought it would be. I decided to focus on a theme for the symposium”žso I could narrow my list of potential speakers. I “žused the theme of creating the mentality that EMS is a profession, not just a job, to find presenters who have this attitude and include it in all levels of their curriculum of initial education and internships.

I created my list of potential presenters and then highlighted the ones I’d had the opportunity of listening to. This shortened the list, and I finally had my presenters.”žNow I had to contact them. I was nervous. I had never done this before and wasn’t savvy to the process.

My first contact was with Heather Davis, MS, NREMT-P, a nationally recognized speaker, a clinical educator and a published author of several EMS textbooks and field training manuals. I readily admitted to her that I was in unfamiliar territory and that I hoped I wasn’t insulting her with my proposal. She was fantastic. She answered all my questions and walked me through the process of creating contracts for travel expenses and honorariums. She then agreed to be the keynote speaker for the symposium.

Thanks to her tutelage, I became more sure of myself and began contacting other presenters. Among them was Dave Page, a nationally recognized speaker and author who is co-creator of FISDAP.”žFor the closing speaker, I contacted Chief Brame, Deputy Chief of the North Las Vegas Fire Department,”žbecause he is known for his exceptionally motivating presentation on professionalism.

On April 10, 2007 the Southern Nevada Health District EMS and Trauma System Office hosted the first annual EMS Instructor Symposium. Forty-five people were in attendance, and we kicked it off with a “meet and greet” that enabled a great networking opportunity. The participants were interactive with the speakers, and everyone seemed satisfied with the event.

It wasn’t until weeks later that I realized what a huge success the Symposium really was. I began receiving emails from EMS instructors asking when the next Symposium was going to be. I was thrilled. I was getting enthusiastic e-mails. Armed with those e-mails and a renewed enthusiasm, I once again headed for my manager’s office with the trepidation of that old adage, “Be careful what you wish for because you might just get it.” My wish was granted.

The second annual EMS Instructor Symposium was attended by 110 EMS educators from all over the country. The response was as amazing as the presenters. We also had sponsors that donated wonderful door prizes.

We will host the third annual EMS Instructor Symposium May 1 at the College of Southern Nevada. This years’ symposium is on track to be the biggest yet. The keynote speaker is Dr. Bryan Bledsoe. Our other presenters will be Randy Mantooth, who played the character Johnny Gage in the hit TV series “Emergency!” and is a national spokesperson for Masimo and the Los Angeles County Fire Museum. Chris Le Baudour will be returning to build on his dynamic presentation from 2008. The symposium will be free of charge. Breakfast and lunch will be provided along with the opportunity for EMS educators to continue networking.

As I said, throughout this process I repeatedly told myself that if I hosted the event, the attendees would come. This was more to convince myself than anyone else. And in the end, much to my joy and relief, come they did.