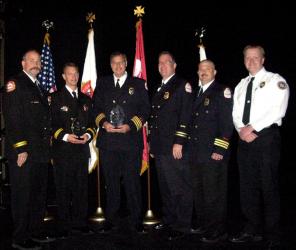 The winners of this year’s Heart Safe Community awards were announced during Friday morning’s general session at Fire-Rescue Med in Las Vegas. Cam Pollock, vice president of global marketing for Physio Control, presented the awards, which Physio-Control Inc. began sponsoring in 2001 as part of an automated external defibrillator (AED) awareness program. It has since expanded to recognize much more, said Pollock. “It’s really an entire system-based approach,” he said.

The Heart Safe Community awards, sponsored by Physio Control, recognize fire service-based EMS systems and other EMS systems that have used creative approaches to treat cardiac-related diseases within the communities they serve. This award takes a holistic approach, valuing the team effort communities employ to integrate systems that lead to better results. Agencies must show how they have improved the quality of out-of-hospital resuscitation through continuous efforts to improve resuscitation quality, such as bystander CPR, AED development, out-of-hospital 12-lead ECGs, and 12-lead advanced notification to receiving facilities, and other continuous efforts to improve resuscitation quality. The award is given in two categories: one goes to a department representing populations of more than 100,000, and one is given to a department representing fewer than 100,000.

“We did not have a very good CPR rate in our community just a few years ago, our rate was about half of what it is now,” said Chief David Travis. Teaching CPR in the public school system “was the single greatest factor in increasing CPR awareness in our community,” he said.

HCRF is also using new technology and software to track cardiac arrest outcomes as well as catalogue the physical locations of the more than 1,000 AEDs throughout the county. Also, HCFR has partnered with all local hospitals, an effort that has improved cardiac outcomes for patients with acute coronary syndrome and sudden cardiac arrest.

Sandy Springs (Ga.) Fire Rescue & EMS was named the winner for the smaller population category, standing out for its outstanding bystander CPR rate of 59 percent in 2010–more than twice the national average. Since 2007, Sandy Springs has trained more than 4,800 residents in CPR and AED use and also placed more than 150 AEDs in the city, an effort that resulted in 17 saved lives.The department has also launched a pilot program to train EMS providers to use therapeutic hypothermia as treatment for cardiac arrest. Sandy Spring has partnered with the mayor and city officials in their efforts, and they have also partnered with law enforcement. All Sandy Springs police vehicles also are equipped with AEDs, and all officers are trained in their use.

“We started our department in 2006 with a rate of less than 1%, and we’ve made these improvements in a short amount of years,” said Shannon Cichosz.”We’re really honored,”

An honorable mention was also given to the Delavan (Wis.) Rescue Squad. Lt. Chris Kaiser represented the department. “We’re a small community in rural Wisconsin, so this means a lot to us. We don’t have a lot of resources, but we do the best we can,” he said.

Reflecting on the award winners, Pollock noted the importance of tracking what your department is doing to affect change in these areas. “Measure what you are doing if you want to see improvement in your system,” he said. 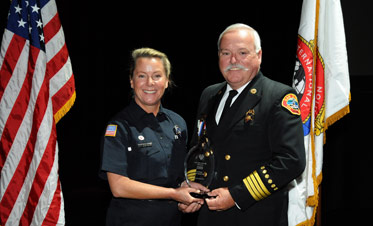 Since 2001, the International Association of Fire Chiefs (IAFC), EMS Division, and Physio-Control Inc. have sponsored the annual Heart Safe Community awards. These awards recognize fire EMS systems — in both larger (more than 100,000 population) and smaller (less than 100,000) communities — that are leaders in providing emergency cardiac care for the citizens they serve. In 2008, an additional award was added — the STEMI Awareness Community Program Award.

The STEMI Awareness Community Program Award is presented to an agency that has implemented a community program to improve therapies for patients with acute coronary syndrome and the life-threatening complication, sudden cardiac arrest, as well as back-end initiatives that include ST-segment elevation myocardial infarction (STEMI) management.

Since the program started in 2001, more than 4,500 AEDs have been deployed throughout San Diego County. A one-stop shop for all the tools necessary for public and private groups to implement PAD programs, Project Heart Beat helps groups with PAD program management services and CPR/AED training. It also helps in the event of deployment with on-call response services that are available 24 hours a day, seven days a week. They include critical incident stress management debriefings.

A Web site helps PAD program managers track information on AEDs in their systems and maintain a history of the AED programs. “E-minders” are sent to program managers for a missed maintenance check, electrode expiration or training expiration. The program is 100% self sustaining with no cost to taxpayers.

Maureen O’Connor, PAD program manager, said, “Since the program’s inception, it has helped save 64 lives and some of the program’s locations have cardiac arrest survival rates in the 70 to 80 percentile range. The program also promoted successful passage of an AED building code ordinance that will require AEDs in all new commercial building construction — the first legislation of its kind in the country.”

These community leaders identified a network of businesses and community meeting places for their program. To help successfully launch the program, they created “Buy-in Funding.” This enabled businesses to pay for half the cost of the AED. The buy-in funding program also included regular device maintenance checks. Other funding sources for the program included grants and donations.

Heart Safe La Plata initiated a unique system, called “AED Alert.” Using their CAD system, when a cardiac arrest call comes in to the 9-1-1 call center, dispatchers communicate the patient location to the nearest business with an AED. Dispatch then asks the business to have a trained responder take the AED to the location of the cardiac call. “This program actually started when business owners with AEDs came to us asking how they could help their neighbors in an emergency,à“ said Scott Sholes, EMS chief and Heart Safe board member. “It quickly became part of our placement process to ask what nearby locations they would cover with their AED, and then add those addresses in the CAD system.”

In addition, Sholes actively promoted Colorado’s Senate Bill 10, which decreased the assessed liability of AED use or non-use. Gov. Bill Ritter signed the bill on March 25, 2009. Heart Safe La Plata also has a “loaner” AED program for community members to borrow for any event. The program has paid off with saves in 2005, 2007 and 2008.

STEMI Awareness Community Program Award
The recipient of the 2009 STEMI Community Program Awareness Award was Miami-Dade (Fla.) STEMI Network, at Miami-Dade Fire Rescue (MDFR). Established in March 2007, the Miami-Dade STEMI Network is a cardiac care action plan with a goal to reduce total ischemic time to less than two hours in patients with myocardial infarction who meet STEMI guidelines. Gaining reperfusion at the earliest point in the care chain using a team approach is the optimum outcome.

The 13 hospitals in the STEMI Network must perform to a minimum acceptable standard that is monitored on a monthly basis by the quality assurance office and medical director of Miami-Dade Fire Rescue. All facilities must comply with these performance contracts to maintain STEMI Network status and continue to receive these patients. For example, hospitals must restore blood flow to a patient’s blocked artery within 90 minutes from paramedic arrival at the patient’s side, and 60 minutes from arrival at the facility. Monthly EMS performance is also monitored.

The average time for a patient experiencing cardiac symptoms to access 9-1-1 is 33 minutes in Miami-Dade County. This average is significantly lower than the national average and is attributed to the strong public educations efforts by the health care providers within the county.

This program has been very successful. Since it began, the Miami-Dade STEMI Network has treated 1,265 patients. Time from arrival at STEMI facilities to reperfusion was reduced from 164 minutes in 2006 to 58 minutes in 2009. Before implementing the network, approximately 12% of patients suffering a blocked coronary artery in Miami-Dade County wouldn’t survive. Today, the county has the lowest cardiac emergency mortality rate in the nation at less than 1%.

Fire Chief Herminio Lorenzo said, “At MDFR, we are committed to cardiac care excellence. There are many patients and families in our community who will continue to live productive lives because of the STEMI Network.”