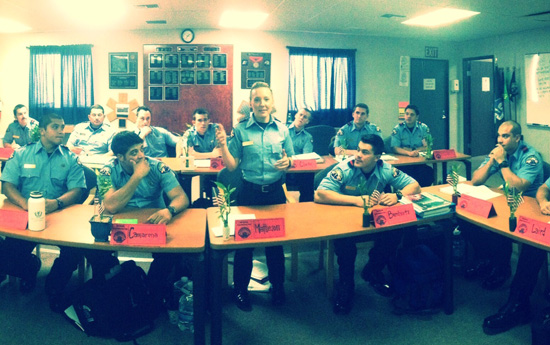 Even as teachers and lifelong learners, sometimes the simple lessons in life elude us. Some say life lessons are common sense, but, as we say in Texas, “Common sense just ain’t so common anymore.” Accordingly, I would like to take this opportunity to introduce a commonsense technique that can greatly enhance the power of our instruction and bring student engagement back into our lessons.

Whether you teach in a formal classroom or the training room of your department, one of the simplest ways to improve your instruction starts with asking participants to stand up when they ask or answer a question. Standing can improve alertness and thinking, teach situational awareness and build leadership skills.

Backed by Research
Educators who’ve been teaching for a while understand this approach intuitively. They see that students who are disconnected from their environment are often just as disconnected from the instructor. Students who are engaged are active learners–stakeholders in their learning. Students who carry out the mundane motions they’ve learned since grade school have become passive learners–tourists in the classroom.

Some notable research has been conducted to support this conclusion. Dr. Max Vercruyssen of University of Southern California demonstrated that there’s a postural effect on learning when the participants stand.1 The heart beats, on average, 10 beats more per minute when standing, increasing blood flow and oxygen. In addition, the brain is more attentive and the speed of information processing increases by 5—20%, creating a “neural symphony” in the brain. This research has been peer-reviewed by researchers at other major universities, notably Harvard, and the results seem to indicate that we simply think better when standing.

Research on what I refer to as the “stand and deliver” phenomenon has also been conducted outside the traditional classroom. Military leaders have long realized that getting soldiers on their feet makes them think and respond better in training sessions. An excellent read on this comes from Dave Grossman in his book On Combat, which is filled with many studies that relate to fire, EMS, police and the military.2

Scene Safety
Standing in the classroom has another notable effect: It builds students’ situational awareness–a skill that can prove invaluable on EMS calls.

Imagine the response if, when you’re teaching, you issue an immediate call “to your feet” whenever anyone enters the classroom. This in itself would teach a component of scene safety that can’t be learned through a simple lecture. I have 50 students in my classroom and they sit between me and the door. Should someone come in to do us harm, they’re much better equipped to run toward or away from the danger when they’re on their feet already. (Of course, with all of them between me and the danger, I’m safe because they form a standing shield!)

More important than their safety, however, is the fact that, by repeating this simple exercise, we increase students’ awareness of their environment in the field. We are teaching not by words but by action.

How many educators try to tell their students to keep their head on a swivel–don’t get tunnel vision–with varying degrees of success? This exercise replaces talking with the best teacher–action and reaction.

Building Future Leaders
If the benefits of enhanced learning and situational awareness aren’t enough to convince you “stand and deliver” is an effective educational strategy, consider this: It can build students’ leadership skills.

When participants stand, it’s often their first chance to build leadership skills and find their voice in our profession. Too many students leave their educators with great information but haven’t been taught to be great leaders. By employing this simple exercise, you allow them to find that voice and to feel comfortable standing among their peers.

The greatest gift we can give each other is the gift of confidence, which can only happen in an active and engaging environment. “Stand and deliver” can be a tool to create new possibilities for the next generation–a foundation of true learning and growth.

2. Grossman D, Christensen L. On combat: The psychology and physiology of deadly conflict in war and in peace. Warrior Science Publications: Millstadt, Ill., 2008.