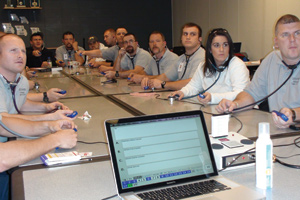 A few years ago, I was looking through the Department of Transportation curriculum and standards for EMTs and paramedics. I noticed more time was “recommended” for teaching marine animal envenomation than the time spent in the correct use of a stethoscope. Why is that?

And early in my career, others laughed at me when I tried to listen to breath sounds in the back of the ambulance. Some folks made such comments as, “Why bother?” or “It won’t change what we do anyway.”

I’ve spent 30 years as a paramedic and educator studying, researching and learning from clinical masters. Most of my knowledge about how to use a stethoscope came from nurses in intensive care units. My experience and hundreds of patients taught me this skill is important and can tell you a lot about the patient if you put forth the effort to learn about how to use your stethoscope and practice to the point of skill mastery.

The Theory
It’s been suggested by some that there’s a high degree of subjectivity in the perception of what sounds are heard and what they’re called. This is because the early classrooms didn’t have the means to present the sounds in a realistic manner and actual clinical patients were often hit-and-miss during clinical rotations.

In fact, in the past, many students were given a written description of what lung sounds sounded like. I’ve had my students rub their hair together between their fingers for fine crackles or suck the soda out of a straw in a class on pulmonary edema. I even forced them to make a wheezing sound with their throat.

A couple of cassette tapes were available that played recorded sounds, but they were hard to hear or understand what you were hearing–or even why the sounds occurred. Student education suffered because of the lack of real patients for us to assess and the lack of resources–or even the knowledge of these resources. I won’t attempt to describe what the sounds sound like, or I’d be guilty of what I just accused others of doing.

Today, however, there’s an abundance of resources available and even a breath and heart sound simulator that gives you an outstanding way to instruct and help students master these sounds before they go out on their own and hear them for real. We’ll discuss this system later.

Fundamentals
To start the process of stethoscopy education, the instructor must first get to know the stethoscope and ensure the students know it also. This area is often overlooked, or we assume our students already know the fundamentals. Human hearing does best at a frequency of 1000 Hz. Most sounds in the chest occur at frequencies at 20—500 Hz. A stethoscope is tuned to these sounds and then amplifies it for the human ear to hear. Our brain then processes the sound and decides what it could be based on the known sounds we have stored in memory. That’s why it’s important to expose students to the pre-recorded sounds before they start treating patients in the field. With practice, they’ll have a better chance of easily differentiating sounds and identifying the associated conditions.

Just remember, how can a student concentrate on a sound if they don’t know what to listen for and what to concentrate on? If you follow some proven teaching tips and pass them along to your students, then you can help them understand the fundamentals of stethoscopy.

The Stethoscope
Most stethoscopes have a bell and a diaphragm. The diaphragm is the flat part, and the bell is the cone-shaped part. Some scopes, Littmann for example, have tunable diaphragms. This means that what you hear is based on how you apply it to the patient. The diaphragm is used to detect high-frequency breath sounds, while the bell is used for low-frequency sounds, such as blood going through vessels, Korotkoff, blood pressure sounds and some heart gallops (e.g., S3 and S4).

With a tunable diaphragm, firm pressure (one that leaves a blanched ring on their chest when you lift it up) tunes the stethoscope for breath sounds. Using the bell with light pressure (no ring on the chest) allows you to hear low-frequency sounds, such as those mentioned above. Some less-expensive scopes are pre-tuned to a general frequency of about 200 Hz, so some, but not all, sounds may be perceived. In short, you get what you pay for in a stethoscope.

Extra tip: Tell your students to remember that when wearing a stethoscope, their ear canals angle forward, so the stethoscope arms should be worn facing forward as well.

Where to Listen
“Everybody gets a courtesy listen” is a line I use with my students. That simply means every patient encounter will involve a breath-sound assessment. Your students also need to understand that where they hear the breath sounds is just as important as what they hear.

The first two are over the broncho-­vesicular area in the second intercostal space midclavicular line on both sides. The patient can breathe normally for these sounds, because they’re easily heard. Inhalation and exhalation are heard equally in duration, with the pitch decrescendo on exhalation.

The next area to listen to is the lateral vesicular area. This is in the fifth intercostal space midaxillary line (i.e., just below the axilla between the front and back). Here, you’re listening in an area that may not have any large tubes, and most of the expiratory sounds are absorbed or “baffled” by the alveoli.

Normal vesicular sounds, both lateral and posterior, are always diminished in exhalation because the exhaled sounds are absorbed by the alveoli. This can trigger many clinicians to report diminished lung sounds in the posterior bases, which is a normal occurrence and doesn’t necessarily indicate pathology.

The posterior bases are located on the back below the scapula, inside toward the spine. The posterior vesicular sounds are easy to hear longer on inhalation, but they frequently disappear quickly as the sounds are absorbed by the alveoli.

Because a normal tidal volume breath doesn’t get much volume to the lower lobes of your lungs, it may be necessary to have the patient take a deeper than normal breath through their mouth. This will facilitate air entry to this area, so sounds can be assessed. This should be the only place in which a deep breath is necessary.

Be careful because deep breaths in all areas invite hypocapnia. In an experiment with my students, I was able to show them a 15—20 mmHg drop in end-tidal carbon dioxide as a direct result of having their patient taking a “deep breath” while auscultating six breaths.

The Practice
Have your students practice this new skill on each other or on manikins. I prefer having them auscultate a partner because they become comfortable with different shapes and sounds.

Once they’ve heard some normal sounds, it’s time to move your students on to simulation. I use a setup from Pinnacle Technology that uses a stethoscope sounder (a fidelity speaker with a foam pad) that plugs into a computer, iPod, iPad or portable music player via the 1/8″ standard audio jack.

The sounders allow the student to hear the sounds through their own stethoscope, creating a more realistic experience. I provide my students with the sounders at the start of the class, and the cost is recovered by lab fees.

For the sounds, I use a multi-sounds trainer from Pinnacle that has several menus available for basic lung sounds and heart sounds. This setup allows me to discuss the sounds and play them at my discretion with the push of the menu button. I can also have every student in my class “wired” into hearing the same sound at the same time.

The students then take their sounders home with pre-recorded music CDs to practice on their own. When they return, they simply plug into each other and many can use the same source for sounds.

As an instructor, you should do a bit of prep work. Several commercial CDs are also available and you can download some breath sounds from the Internet. Get these sounds and compile them into categories for easy practice. Either burn a CD for your students or make the sounds available on a website for easy download.

I made a prerecorded, narrated tutorial that my students can take to review on their own with their sounders and their own stethoscope. It’s like a stethoscopy lab in a box.

Encourage your students to use their scopes while browsing the net looking for sounds. They can plug the Y adapter into the computer. The single (male) end goes into the audio out on the computer and the computer speakers into one of the two (female) jacks with the sounder in the other.

There aren’t enough lab hours in the course to master this skill; it takes outside practice. Sounders make that possible, and practice fosters intrinsic rewards for your students. Remember, the goal is to give your students more time to practice on their own outside scheduled labs. You should use the precious lab time for evaluation and other simulations.

Mastery
Somewhere along the way, you need to do some competency evaluation. Set the standards so that all students know what’s required of them prior to testing. I used to drive around in the ambulance with a boom box, creating distraction while my students would have to correctly call five lung sounds, five heart sounds and five blood pressures. They use their sounder and stethoscope. I use a small, cheap MP3 player and sounds I selected. If they’re successful, they’re publicly rewarded by being “knighted” with a stethoscope around their neck and a certificate.

It’s a big deal to them and a very powerful motivator and confidence builder. If your student has mastered the skill, through hours of inside and outside practice, then the skill has value to them, and suddenly the excuses about why they can’t get vital signs or lung sounds will disappear. JEMS

This article originally appeared in August 2011 JEMS as “Lung Sound Assessment: The lost art of using a stethoscope.”