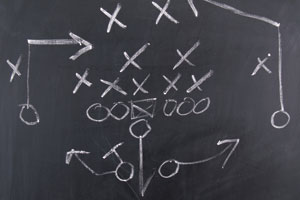 You get called to a wedding rehearsal dinner packed with excited family members and friends of the bride- and groom-to-be. The people are there to celebrate the wedding of two of their favorite people when, suddenly and without warning, the bride’s grandmother collapses with nausea, weakness and respiratory distress.

You were right around the corner from the restaurant when the call came in, so you arrived in less than a minute. The crowd’s emotions were already charged up before this medical emergency occurred. Now, you arrive and find the beautiful bride-to-be screaming over “Nanna,” who’s lying on her side, nauseous, vomiting and gasping for air.

The bride-to-be’s grandfather and her “daddy” (Nanna’s son), are all standing in a circle around the woman when you reach her and set down your oxygen bag, airway case and medical kit.
In the game of life, the cards are already stacked against you.

You, in your role as the lead paramedic, kneel down to establish communications with the 85-year-old patient and start an assessment. She’s drooling and mumbling incoherently, and she has a confused look in her eyes as she tries to listen to you. She exhibits right-sided facial droop and is unable to follow your request to hold her arms out straight and level. One side of her body is clearly weaker than the other.

Your partner readies the cardiac monitor and tries to politely place leads on her, but he can’t get them all in place because her dress, slip, girdle and bra are in his way. He’s hesitant to cut them open and expose her in front of her family. So he says, “I think I’ll wait to hook her up and run a 12-lead when we get her out to the rig.”

He turns his attention to spiking an IV bag and readying it to administer to the patient. He begins to slap her hand to find a good vein to cannulate. He then says, “I can’t find any good veins and can’t get to her antecubital without cutting open the tight sleeve of her dress.”

You say, “OK, give me a minute, and I’ll take a look to see if I can find one.” Your partner then kneels next to her with the IV tubing dangling from his one hand and an alcohol prep, IV catheter and tape in his other hand, waiting for you to take a look.

Engine 52 arrives, and the crew walks in without any extra equipment or the ambulance stretcher. One of the firefighters cracks open the valve on your oxygen (O2) tank, sets the regulator to 10 LPM, tears open the plastic bag of a high-concentration non-rebreather oxygen mask and fills it with oxygen so it’s ready to deliver 80—90% oxygen to the woman.

A police officer arrives with his own O2 bag but places it down because he sees that yours is already on the floor near the patient. He then stands nearby with his small notebook open, waiting to hear her name and age for his police report. The engine’s company officer stands next to him with his computer open, waiting to chart the care being given–as it’s being given. Another firefighter stands near the “O2 firefighter” and awaits orders from you.

The “O2 firefighter” dutifully stands by and awaits the OK from you to place the oxygen mask on the elderly patient who’s now very weak, pale and diaphoretic. Early signs of cyanosis are showing around her vomit-laced lips. He seems to be waiting for you to stop attempting communication with her before he places the mask on her face.

The family and other nearby guests can clearly see she’s in trouble. Then they hear the lead paramedic say, “Where the hell is the suction unit?”

The unassigned firefighter responds, “Out at the rig. Do you want it?”
Suddenly, you hear the patient’s son shout, “Of course he wants it! She’s got a ton of vomit in her mouth.”

You pull the radio off your hip and radio out to Engine 52’s driver/engineer, “Medic 21 to Engine 52 engineer, bring in the suction unit.”

Then you hear comments yelled from the crowd:
>> “Don’t just stand around. Do something for her.”
>> “You brought all that crap in here, and you don’t even have anything to clear her airway out?”
>> “Give her some oxygen. Why is that fireman just holding that mask in his hand? Put it on her face. She’s turning blue.”
>> “Where’s the stretcher? They brought in a computer and left the stretcher outside.”
>> “Quit playing doctor, she’s having a “˜stroke!’ Get her out of here!”

You’ve heard that last statement before, and it makes your blood boil. You look at the guy saying it and tell him, “Sir, I am not playing doctor. I’m a paramedic trying to take care of this woman. Please let me do my job.”

His reply is, “I see what you and your partner are trying to do, but everybody else is standing around with their hands in their pockets. Why are you two the only ones working on her?”
It’s a rude awakening. His comments hit you like a wet wash cloth.

You suddenly realize you’re in the middle of a large crowd of people with a very sick patient who’s clearly having a cardiovascular accident complicated by an unstable airway, and only two of the seven responders on scene (28.5%) are actively involved in patient care.

You begin to bark out orders.
>> To the O2 firefighter: “Suction her airway, put that O2 mask on her and get an 8 endotracheal tube and large straight blade ready for me.”
>> To the engineer: “Please get a few people to go out with you and get our stretcher in here ASAP. And, while you’re out there, tell dispatch to call the stroke center and advise them we are declaring a stroke alert and will be there in 20 minutes.”
>> To the police officer: “Officer, please get a tablecloth and use a few people to create a curtain to give our patient some privacy while we cut her clothes open to put electrodes on her and start a humeral IO.”
>> To the fire captain: “Captain, could you hold off on charting, get the EZ-IO drill out of our kit and ready it for my partner please?”
>> To your partner: “Mike, cut her clothes, get that 12-lead running, establish an IO and draw some blood to check her glucose level.”

Things begin to happen rapidly now. The patient is cared for. Her frail body is covered by a sheet and blanket, and you exit the restaurant with your precious cargo.

The woman’s husband is escorted to the ambulance by the fire captain and told that his wife is being taken to a specialty center. He’s then buckled into the front passenger seat of the ambulance to accompany her to the hospital.

The police officer sees a large crowd of “out-of-town” relatives piling into their cars to attempt to follow the ambulance to the hospital. He politely orders them not to do so because it would be unsafe and tells them to follow his cruiser to the hospital.

After turning over your patient to the hospital emergency department (ED) staff, you come out to clean and restock your ambulance and find a few of the crew standing around the back of the ambulance. One pulls out a cigarette to have a smoke. Two others are laughing about a skit they saw the night before on Saturday Night Live.

As this is occurring, you see the family arriving and heading toward the ED entrance. You tell the crews, “Folks, the call’s not over until we’re out of sight of the family. Let’s clean up and save all the non-work related stuff for back at the station.”

The patient’s son then walks over and thanks you and the rest of the personnel involved for taking such good care of his mother. He apologizes for getting too “wound up” at the scene but says he just got upset because he felt like things “just weren’t happening quick enough.”

Lessons Learned
You walk away realizing there was a lot to be learned from this call. You were operating at only 28.5% efficiency and in an uncoordinated manner. You also realize that if it was your grandmother lying on the floor and the same approach was taken to her care, you’d be upset like the patient’s son was.

At the station, the captain calls you all together for a quick post-incident discussion of the call and says that it wasn’t managed as well as it could have been. He tells the crews that this was an example of how they need to function as more of a team on medical calls, much like they do at a structure fire.

He compares it to a football team that has to go out on the field and march down the field in the last two minutes to score a winning touchdown.

He points out that, in football, each play is planned and called in advance–like an ALS protocol–and everybody is expected to execute their assignment without the quarterback having to tell each team member who they need to block, where to run or how to hold the football.

The crew gets the analogy, understands their inefficiencies and realizes that their inactions, or delayed actions, could cost a patient their life. They then agree to follow the “pit crew” approach that the department’s EMS training coordinator has been preaching for months.

In an odd, but practical, way, EMS is, in fact, very much like a game. There’s always an objective to each patient situation and a prescribed action plan (and tasks) that are developed in advance of “playing the game” to enable the best, most organized and methodical players to win.
The winner of the game of EMS is your patient. JEMS

This article originally appeared in June 2012 JEMS as “EMS is Not a Game: Or Is It?”