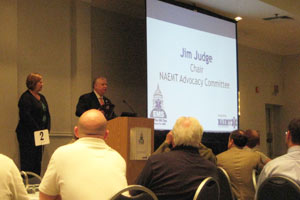 Almost 200 attendees at the 2012 EMS on the Hill Day are deploying this morning to meet their Congressional and Senate representatives. Armed with color-coded talking points and “leave behinds,” the 198 participants will take part in up to six meetings between 9 a.m. and 4 p.m.
There are three pieces of legislation that will be covered at each of the 246 scheduled meetings:

Co-sponsor the Public Safety Officers’ Benefits Improvements Act (S. 1696, H.R. 4018). This extends the death and other benefits under the Public Safety Officers’ Benefits (PSOB) program to non-profit nongovernmental paramedics and EMTs who die or are severely injured in the line of duty. This is the third year the National Association of Emergency Medical Technicians (NAEMT) has advocated extension of this benefit. It appears to have the best chance for success.

Support of Medicare Ambulance Access Preservation Act (S. 424, H.R. 1005). The Medicare Ambulance Access Preservation Act would extend the existing temporary relief through 2013. That time will allow eventual implementation of the findings of the Government Accounting Office report by providing a 5-year adjustment of 6% for urban and rural ambulance service providers and a 5-year extension of the super rural payment for extremely rural providers. This is the third year NAEMT has advocated for a more permanent ambulance reimbursement solution.

In the House, co-sponsor the Field EMS Quality, Innovation, and Cost-Effectiveness Improvements Act of 2011 (H.R. 3144). Senators will be urged to support efforts to promote and cosponsor similar legislation once companion legislation is introduced.

H.R. 3114 addresses many of the challenges impeding the ability of EMS to better fulfill public expectations so that all who need emergency medical care in the field can depend on the highest quality of care and transport to the most appropriate clinical setting. Among the Institute of Medicine report, “Emergency Medical Services: At the Crossroads,” recommendations addressed in H.R. 3144 include the establishment of the Department of Health and Human Services as the primary federal agency for EMS and trauma. The legislation would also establish new EMS grant programs; enhance research initiatives; and promote high-quality innovation and cost-effective field EMS.

Growing Participation by Other EMS Organizations
Started by the NAEMT with help from Advocates for EMS, the third annual advocacy event added participation by the American Ambulance Association (AAA). AAA scheduled their board meeting for Tuesday and provided a “Reimbursement Task Force Meeting” before Tuesday night’s briefing.

In addition, the National Association of EMS Educators scheduled their board meeting on Monday and Tuesday.

Preparing for Advocacy
Laura Cathcart, a Maryland EMT with the Laurel Volunteer Fire Department, says that her lasting impression from this past year was that her “representatives were so accessible.” The night before briefing and the logistical preparation contribute to her experience.

Laurie Bendall and Chris Corbin, from Crimson Consulting, handled the “human Sudoko” meeting schedule. It helps that both of them are active EMS providers.