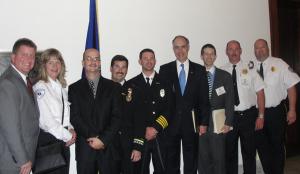 Note: The deadline has been extended to April 15. Learn more about EMS on the Hill Day and register here.

In May 2010, 120 EMS professionals from 40 states and Puerto Rico descended on Washington, D.C., to educate senators and representatives about issues affecting EMS. The National Association of Emergency Medical Technicians (NAEMT) organized EMS on the Hill Day, and it was such a success that they’re doing it again on May 3 and 4. The deadline to register for the event is March 31.

On May 3, organizers will hold a briefing, including the opportunity to network with other participants. The next day, EMS professionals will meet with legislators and staff during morning and afternoon appointments NAEMT will have set up in advance. The evening of May 4, a reception will be held at the Washington Plaza Hotel.

According to NAEMT’s website, the following goal for EMS on the Hill Day 2011 is to:

Kenneth M. Erikson, paramedic and deputy chief of operations of Community Ambulance Association, Ambler, Pa., received one of the NAEMT’s four $1,200 grants to help pay expenses for attending the 2010 event. (The deadline to apply for this year’s grants was March 1.)

“It was a great experience,” he said. “It’s not every day you get to meet providers from all over the country.” He added that systems and stories are different across the country but everyone “shares the same common problems and goals.”

Ken Hockett, a paramedic with Manteca (Calif.) District Ambulance, was another 2010 grant recipient. He said meeting with Congressional staff was the incentive he needed to become even more involved in promoting legislation that affects EMS: He joined NAEMT’s Advocacy Committee and currently serves as the District IV coordinator. Erikson also joined the Advocacy Committee and is the District I coordinator.

Erikson is going back to D.C. this year because he thinks it’s “important for those of us who can make the trip” to do so. He said that talking to legislators and their staff is good for “our generation and the next generation” of EMS providers. He said last year’s experience was intimidating at first. People who had dealt with leaders in Washington gave him tips, so one of his goals this year is to help newcomers feel comfortable during the day.

Changes from 2010
NAEMT President Connie Meyer, who is a paramedic and EMS captain for Johnson County Med-Act in Kansas, said this past year’s EMS on the Hill Day was better than organizers had hoped. “We hoped we’d get one person from each state,” said the 24-year EMS veteran. Instead, 120 EMS professionals met with more than 160 legislative leaders on the Hill.

Meyer said organizers have made a few changes this year. EMS on the Hill Day will be on Wednesday, rather than Tuesday, because senators and representatives are more likely to be in the office on that day of the week. “Wednesday is the day many of them set aside to meet with constituents,” said Meyer.

Another difference is that instead of all the EMS personnel getting talking points the night before visiting the Congressional offices, three talking points will be e-mailed to registered attendees well before they leave for Washington. Meyers said this is because she heard of people staying up late to study their “homework” this past year. “Typical EMTs–they want to do it right,” she said.

Hockett felt the event was well organized and NAEMT did a good job preparing people for the visits and said the talking points were useful. “They helped you organize your thoughts,” he said. In 2010, he visited the offices of Senator Diane Feinstein and his congressman, meeting with staff in both cases. He said he noticed differences between the offices. Feinstein’s office was busier than his representative’s. He got the feeling the senator’s staff was “more on task,” although they had set aside time for the meeting and asked thoughtful questions. The atmosphere in the representative’s office was more relaxed and informal.

In 2010, a small group of EMTs and paramedics from Pennsylvania also attended the inaugural EMS on the Hill Day. Erikson said in addition to visiting individual senators’ offices, they visited as many members of the House of Representatives as they could–whether they were constituents or not.

Erikson is used to dealing with local politicians and his experience talking to staff in Washington was similar, besides the “bigger buildings,” he said.

The Goal
Meyer said the biggest goal for EMS on the Hill Day is to educate staff. Hockett believes the EMS providers did just that. “We had questions like, ‘Exactly what is EMS?’ and ‘So, you’re not a firefighter?'”

Hockett would definitely participate again. “I would do it again. It was productive, beneficial and helpful to the EMS community,” he said, adding that the experience “drove home to me how important [educating legislators] is for us.” People in Washington meet with many people lobbying for their special interests. EMS needs to make sure their interests–and their patients’ interests–are heard, too.

Erikson said it’s important to have the face-to-face meetings because there “are so many issues on the plate for these politicians. Face to face has such a bigger influence than a letter.”

No one can point to legislation that directly relates to this past year’s visits, but the three providers JEMS talked to are confident that this is just the beginning. Erikson said, “This is something that’s going to get bigger and bigger every year.”

Meyers adds that the EMS community, as a whole, can participate in the education process by talking to their senators and representative when they are in their home districts.

Hockett said, “We need persistence to show we weren’t just angry one day.”